Ian Dowling acquired the object at an auction three years ago 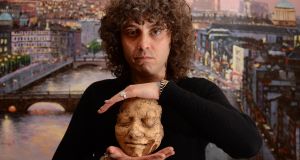 A collector who acquired the death mask of Kevin Barry has offered to lend it to an Irish museum.

Ian Dowling bought the death mask of Barry, who inspired one of the most famous Irish rebel songs, at an auction three years ago in Kilkenny for €2,700.

He anticipated that the State might be interested in acquiring what is the original death mask, but nobody stepped in to buy it.

Barry was hanged in Mountjoy Jail in November 1920 for his part in an IRA raid which killed three British soldiers. Barry was “just a lad of 18 summers”, according to the song which has been covered by many singers including by Boy George and Leonard Cohen.

Mr Dowling makes a living from buying and selling Irish antiques and memorabilia, but says he has no intention of selling the Kevin Barry mask as it has a personal connection to him.

Kevin Barry’s mother was Mary Dowling and she is related to Ian’s father. “When Kevin Barry moved up from Carlow, he was staying on the South Circular Road above a shop and my grandfather grew up in that shop after Kevin left,” he said.

“I will never sell it. It is a museum piece. It belongs in a museum.”

Mr Dowling stars in a 10- part series called Irish Pickers which is narrated by Ardal O’Hanlon and debuts on Thursday night.

For years he has travelled Ireland and the UK hunting down and buying collectibles that tell stories of the country’s past.

Among the items in his collection is a 1798 era musket, a one-of-a-kind whiskey vending machine, the original Tivoli Theatre sign and a framed petition calling on the government to allow a widower to marry his late wife’s sister.

The 10-part series Irish Pickers premieres on Blaze from March 19th at 9pm. The station is available on Sky at 164.