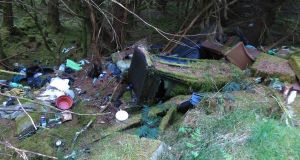 Illegal dumping: Coillte has spent more than €2 million in the past five years dealing with illegal dumps on its lands.

Six hundred tonnes of industrial and domestic waste have been found illegally dumped in two Coillte-owned forests in Co Meath – the largest-ever discovery that has been made.

Saying it will cost €100,000 to clean up, Coillte’s national estates security and risk manager, Michael Power, said: “This is dumping on an industrial scale. This is at a different level; it is way off the scale.”

The two forests are next to each other, separated only by a public road. The two ATMs stolen from banks in Kells, Co Meath just over a week ago were found in Barley Hill.

“There is plastic there, broken pipes, polystyrene, foam and domestic rubbish all mixed in. This was definitely a well-organised and criminal act,” Mr Power said.

Coillte, which has spent more than €2 million in the past five years dealing with illegal dumps on its lands, is now working with An Garda Síochána and Meath County Council to identify the perpetrators.

Dumping causes serious environmental problems. “It can pollute rivers and drinking water, damage biodiversity, and is a threat to both the people who live in an area and recreational users,” said Mr Power.

Members of the public are urged to report illegal dumping cases to the Garda, local authorities, or to contact Coillte via its confidential forest security hotline on 0818 776 300.