Dublin memorial to 13,000 Irishmen killed in WW1 in Flanders opened 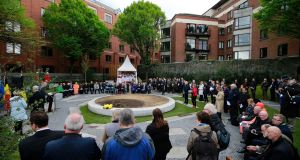 The Flanders Fields Memorial in Dublin is across from Christchurch Cathedral. Photograph: Nick Bradshaw/The Irish Times

More than 100 years after the first World War, the government of Flanders has created a lasting memorial in Dublin to the Irish who died in that part of Belgium.

The Flanders Fields Memorial is situated in the peace garden opposite Christchurch cathedral, a largely unused public park owned by Dublin City Council which now has a circular memorial in place to remember the Irish who died in Flanders.

According to the In Flanders Fields museum in Ieper (Ypres), more than 13,000 Irishmen died in Belgium in the first World War.

Almost all of those who died did so in the 13 miles of front in Ypres salient in Flanders.

“Defend Catholic Belgium,” Irishmen were told and so they did. Many more of them died in the defence of Belgium than in the creation of the Irish State.

The Lord Mayor of Dublin Cllr Nial Ring reminded those present that the peace garden was opened in 1988 at a time when there was no peace on the island of Ireland.

“People will find great solace and hopefully a time for reflection and reconciliation when they visit this place,” he said.

The circular memorial contains a box full of Flanders soil and a brass plaque remembering the Irish who died there in the war.

The speaker of the Flemish parliament Jan Peumans read out the names of places where Irishmen fought 100 years ago, including Langemarck-Poelkapelle, Wijtschate, Messines and Menen.

Mr Peumans said the idea for the memorial came from the minister-president of Flanders Geert Bourgeois.

“We are here not to honour military glory. We are united in remembering the human price to safeguard our peace and human rights,” he said.

“We are here to honour the Irishmen who came to Belgium each for reasons of their own to restore the liberties of an invaded neutral country.”

However, he stressed that the peace park was about reconciliation and acknowledged the presence of the German ambassador to Ireland Deike Potzel at the ceremony.

Irish links with Flanders run deep, all the way back to 1298 when the Earl of Kildare sent a contingent of Irish troops in support of the Count of Flanders.

In the 16th and 17th centuries thousands of Irishmen fought on both sides during the battles in what was then the Spanish Netherlands and the Wild Geese were involved in fighting on one of the most contested soils in Europe.

“Given the intertwining histories of Ireland and Flanders, the memorial is deeply moving and poignant and a symbol of the ties that bind us together,” the Minister of State for European Affairs Helen McEntee said.

Schoolchildren from Ireland, Flanders and Germany recited a prayer and then the world-famous buglers, who play every evening at the New Menin Gate in Ypres, performed the Last Post and Reveille.

The ceremony was completed with the Christchurch choir performing the European anthem Ode to Joy.