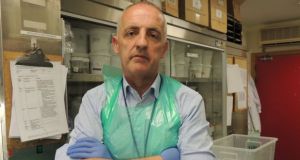 Consultant pathologist Rob Landers: ‘For the HSE to claim they were unaware of the issues and risks associated with the mortuary is at best disingenuous.’ Photograph: Eoghan Dalton

Pathologists at University Hospital Waterford (UHW) have reacted angrily to a statement by the South/Southwest Hospital Group (SSWHG) saying it had “no evidence” to substantiate claims about the condition of the hospital mortuary.

In the statement on Monday evening, the hospital group said it was “not in receipt of any incident report form from any staff member in relation to the mortuary at University Hospital Waterford”.

Responding to the group’s statement, consultant pathologist Rob Landers said it was a “predictable attempt to discredit and undermine four professional doctors who have put their reputations on the line in order to improve conditions at the hospital”.

“For the HSE to claim they were unaware of the issues and risks associated with the mortuary is at best disingenuous,” Prof Landers said.

He claimed the HSE at regional and group level was “completely aware as far back as 2004 about this”. Prof Marie Cassidy, who was then State pathologist, had written to management expressing concerns, he said.

“With regards to the lack of an incident report – this reflects more on managerial ineptitude at overseeing the management and governance of the mortuary.”

On Tuesday, Taoiseach Leo Varadkar intervened in the controversy, describing as “a strange story” the claims surrounding the mortuary facilities.

“What really matters is that the new mortuary be built, it is being built, the planning permission is secured and the project is going out to tender.”

In their letter, released under the Freedom of Information Act and first reported on last week, the consultants said dead bodies had been left lying on trolleys at the hospital, leaking bodily fluids onto corridors and making closed-coffin funerals unavoidable in some cases.

The Waterford News & Star has since reported that the group chief executive, Gerry O’Dwyer, received an email in 2017 from one of the pathologists outlining an incident in which a body was transported halfway across the country because there was no room at the mortuary at the time.

In the letter, the pathologist addresses Mr O’Dwyer, saying: “I do not need to tell you how upsetting and traumatic this moving around of the remains and associated delays must have been for the bereaved parents at a most vulnerable time.”

The email ends by stating that the “new mortuary facilities for UHW languishing on the HSE Capital Plan since 2006 (and currently not cash-flowed till 2021 at earliest) need to be prioritised by SSWHG as a matter of urgency”.

Meanwhile, Waterford Senator Paudie Coffey, who had decades of experience as an undertaker before entering the Oireachtas, has said he has “never” come across the failings presented in a letter by consultant pathologists at UHW’s mortuary.

Mr Coffey, whose family were undertakers for over 30 years in Waterford until 2014, said he was not aware of any closed coffins being required for reasons related to conditions at the mortuary.

“I have never, ever come across that. It was never said to me either,” the Fine Gael senator added.