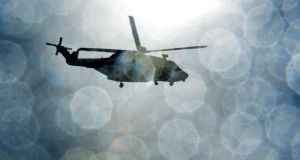 An Irish Coast Guard helicopter has been sent to assist with a search off Kilkeel, Co Down, early this morning. File photograph: Cyril Byrne

An Irish Coast Guard helicopter has been sent to assist with a search off Kilkeel, Co Down, after reports of a person entering the water on Monday evening.

A spokeswoman for HM Coast Guard said the Police Service of Northern Ireland had called the service at 7.45pm on Monday after a report of a person possibly entering the water.

“Kilkeel, Newcastle and Portaferry Coast Guard rescue teams, Kilkeel and Newcastle RNLI lifeboats, an Irish Coast Guard helicopter and the police have all been sent,” she said.

HM Coast Guard said early onTuesday morning that it was currently co-ordinating the search, but had no further information.