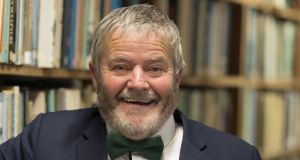 Enda O’Coineen: a staff consultation with Irish Studio over the potential merger has been commenced. Photograph: Dave Meehan

The owner of the Sunday Business Post has entered exclusive talks to buy the publisher of the Irish Tatler magazine, with a deal expected before the end of the month.

The Irish Times reported in August that Kilkullen Kapital Partners was in talks with Irish Studio Media Publishing. At the time, Enda O’Coineen, the founder of Kilkullen, confirmed there had been discussions “but there is no deal yet”.

However, talks between the pair are now at an advanced stage, and a staff consultation with Irish Studio over the potential merger has been commenced. It is believed that a period of exclusivity between the parties has been agreed, and a target has been set to close the deal before the end of the month.

If the purchase goes through, the titles will come together under Post Publications Limited, which is ultimately controlled by Mr O’Coineen. Irish Studio is the owner of several well-known glossy magazine titles, including Irish Tatler, U Magazine, Food & Wine and Auto Ireland. It purchased several of these magazines from Norah Casey’s Harmonia group in 2017.

Irish Studio had been linked to a bid for the Post when the newspaper was originally put up for sale by its then owners, Key Capital. However, Mr O’Coineen won out and closed the deal for the title last year. He has spoken about reinvigorating the brand, including a potential stock market listing for the business which controls the title.