Coalition parties to appoint 20 junior ministers if accord ratified 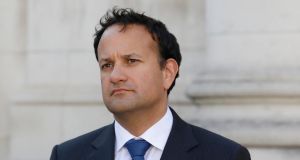 Leo Varadkar may give junior portfolios to some who will lose their Cabinet position. Photograph: Leon Farrell/Photocall

Fianna Fáil, Fine Gael and the Greens will appoint 20 ministers of state, known as junior ministers, if the coalition deal is ratified by their parties.

This would be the joint highest number on record, alongside the Fianna Fáil-Green Party government of 2007 led by Bertie Ahern.

The three parties intend to spilt the 20 posts on the basis of Fianna Fáil and Fine Gael getting eight ministers of state each, with the Green Party getting four.

The split is not detailed in the programme for government – as the Cabinet split of six senior ministers each for Fianna Fáil and Fine Gael and three for the Greens is – but has been agreed.

Mr Ahern appointed 20 junior ministers to his government in 2007 but the numbers were reduced by his successor Brian Cowen from 20 to 15 as part of cost-cutting measures during the financial crisis in 2009.

The Fine Gael-Labour government of 2011 to 2016 held the number at 15 but then taoiseach Enda Kenny brought the number up to 18 for the Fine Gael-Independent minority government, and Leo Varadkar has brought it up to 19 during his term as Taoiseach.

Appointing 20 junior ministers is the upper limit allowed under legislation passed by Mr Ahern in 2007.

The 20 will be inclusive, however, of the government chief whip and the two so-called “super junior” ministers of state who sit at the Cabinet table.

Roderic O’Gorman, the Greens’ justice spokesman, also on Thursday said his party would seek the position of attorney general or hold a veto on who was appointed. Mr O’Gorman said the party would not allow someone who had views counter to Green principles take the post.

Among those from the Fine Gael backbenches tipped for junior positions are Peter Burke, Colm Brophy, Martin Heydon, Alan Farrell, Hildegarde Naughton (who is also seen as being in contention for a full Cabinet portfolio or a “super junior” slot) and Jennifer Carroll-MacNeill.

Mr Varadkar may also give junior portfolios to some who will lose their Cabinet position.

Meanwhile, Fine Gael has launched an inquiry after a leaflet urging a vote against entering coalition with the Greens and Fianna Fáil was sent to those who have a vote in the party’s internal ratification process.

Suspicions were aroused in Fine Gael after the leaflet – which, among other things, argues for a second election – was posted to constituency delegates and others who have a vote, sparking fears that someone had access to internal Fine Gael records.

A party spokesman said: “An inquiry is under way to establish if there was a breach of GDPR.”