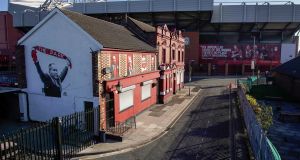 The Premier League held a conference call of all 20 clubs top-flight and swapped ideas on the possible plans for resuming training and eventually a return to playing matches. Photograph: Getty Images

The Premier League’s clubs put on a united front during a three and a half hour video conference on Friday saying they remained determined to find a way to complete the season in the face of the Covid-19 crisis, with the use of neutral stadiums without fans now a prerequisite.

But the harmony is not complete, with more than one club privately feeling the campaign ought to end because the obstacles to the hoped-for resumption in mid-June are simply too great.

The principle concern is whether playing on would put the health of the players, club staff members and, by extension, their families at risk. The Manchester City striker Sergio Agüero said on Thursday that he was “scared” to finish the campaign for this reason and there are other players who share that fear.

The English Professional Footballers’ Association has made it plain that the safety of the players is its overriding concern; it will not contemplate putting them in harm’s way and the Guardian reports that some players want the union to make a stand on their behalf. On the other hand, there are many more players who do want to continue. As on so many points, consensus is difficult to achieve.

The Premier League issued a lengthy statement after the conference call and one line stood out. “It was agreed that the PFA, LMA, players and managers are key to this process and will be further consulted,” it said.

The PFA knows that what the government and Premier League want is fundamental and it has come to look increasingly clear that the UK government wants the show to go on, partly for the lift that it would give to the population.

There are players and club staff members who think the resumption of the season is wishful thinking; they cannot see how the rates of infection will drop to a manageable level quickly enough but, for now, it is a waiting game until the government indicates next Thursday whether they can ease the current lockdown. The Premier League will meet again next Friday.

Eight to 10 stadiums are being identified for use as neutral venues, with almost all expected to be Premier League grounds and clubs would not play in their own stadium.

The move follows advice from police and stadiums chosen will be those granted licences by the sports grounds safety authority. That will take into account factors such as their suitability for respecting physical distancing inside the stadium, for keeping people away from the outside of the stadium and local infection rates.

There was a preference articulated for grounds – such as Manchester City’s Etihad Stadium and Brighton’s Amex Stadium – which are away from highly populated urban centres.

The league aims to ensure that clubs would not have to travel long distances and that travel would be as equally spread as possible.

The conference call went into detail on proposed plans for a safe return to training and playing, including protocols around testing and creating a sterile environment for players and staff.

Protocols are still being worked on for a return to full training and matches and there is an understanding the players’ comfort with these needs to be ascertained. On Thursday Brighton’s Glenn Murray described the idea of wearing face masks in training as “farcical” but it is understood the detail presented was well received.

All 20 clubs suggested they were committed to continue with the season, with the sense among some clubs being that if a restart is not possible now then it may not be possible later either. Those clubs that have reservations against resumption chose not to speak out. None of the issues that have so far split clubs – from the extension of contracts to concerns over player welfare – were raised.

With no vote taken on which way to proceed, pending advice from government, the key meeting passes to next week. If the League is to stick to its preferred outcome of a return to training on May 18th and matches from June 8th, however, the window for finding a way forward is narrowing.

The League said: “The clubs reconfirmed their commitment to finishing the 2019-20 season, maintaining integrity of the competition and welcomed the government’s support.”

Bobby Barnes, the PFA’s deputy chief executive, said earlier in the week: “We have reiterated that players are not just footballers but partners, fathers, mothers, sons and daughters, who share the same health concerns as everyone else during this pandemic.

“We have been assured of the intentions of all that there would be no resumption unless guarantees of safety could be given to the players. The over-riding principle for all parties is the healthy and safety of all participants on and off the field and, of course, the wider public.”

1 Sideline Cut: Vignette shows why Bird is the true shark in The Last Dance
2 Brendan Rodgers says he was ‘really knocked’ by coronavirus
3 GAA preparing for earlier return to activity but pitches to remain closed
4 Andrew Porter diary: Meat, veg and intermittent fasting the order of the day
5 Anfield and Cheltenham show sports again lacking in looking after their own
Real news has value SUBSCRIBE