Coronavirus: What we know so far about lifting the lockdown

What restrictions will be lifted first? When will schools reopen? Will the 2km limit increase? 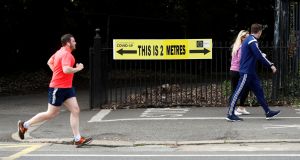 People are seen jogging past a social distancing sign in the Phoenix Park in Dublin last week. Photograph: Jason Cairnduff/Reuters

Current restrictions introduced to deal with Covid-19 are expected to largely remain in place for a number of weeks, past their initial May 5th expiry date.

Cabinet met at 3pm today to sign off on the exit plan from the lockdown with Taoiseach Leo Varadkar calling it a “road map to reopen Ireland”.

Mr Varadkar identified five criteria for future decision making on the easing of restrictions including: the progress of Covid-19; healthcare capacity and resilience; testing and contact tracing capacity; the ability to shield at risk groups; and the risk of secondary morbidity.

A further 34 people diagnosed with Covid-19 have died, the National Public Health Emergency Team disclosed on Friday. There have now been a total of 1,265 deaths associated with the disease in Ireland, it said. Another 221 new confirmed cases were also reported, one of the lowest daily figures for some weeks. This brings the total number of cases to 20,833

Here’s everything we know so far about the lifting of restrictions:
Mr Varadkar said the changes to the current restrictions will be made every two to four weeks and will not happen as fast as the restrictions were put in place. He warned that restrictions may have to be reintroduced “if it looks like the virus is going to surge back”.

The Irish Times understands the early stages of plans being discussed by the NPHET would see retailers, cafes and restaurants reopen on a limited basis, with the tourist industry also reopening on a limited basis in the mid-stages. Schools and colleges are not expected to reopen until September.

NPHET is the body of medical experts and health service chiefs which has been overseeing the response to Covid-19 and advising the Government on steps it should take to navigate through the current coronavirus pandemic.

Initial drafts of the NPHET plan spaced the phases out in periods between early May and September, although no dates are on the latest draft being considered by NPHET.

Under the latest draft the first phase would:

- Allow the over-70s who are cocooning out to walk on a “no touch” basis and see them potentially allowed go to the shops at certain times. Sources previously suggesting others may be asked to stay at home while “cocooners” are out.

-Allow outdoor workers such as builders and gardeners return to work.

- Allow a maximum of four people not from the same household gather outside while obeying social distancing.

- Potentially increase the distance people can travel outside their home for exercise from 2km to 5km or 10km.

-Businesses and manufacturing are expected to open in the early stages of the plan if they adhere to social distancing and health rules.

- Allow retailers such as DIY and garden centres reopen.

- Allow retail outlets deemed essential in an earlier round of restrictions – such as banks, repair shops, optometrists and others – open again.

- Some sporting and recreation facilities could be reopened in the initial phase of the plan. This would only apply to such activities where social distancing can be maintained, such as tennis courts and golf courses. The draft plans are also understood to allow some sports team training in the initial phase – but only where there is no contact, where the groups of people training are very small and social distancing can be maintained.

The broadening of family units is not seen as likely in the first phase. Other measures – such as the number of people allowed gather together – are also expected to be scaled up throughout the phases.

Early phase stage one: would allow small retailers reopen by allowing only a limited number of staff and customers on the premises.
- Restrictions on travel away from the home could increase to 20km.

-Outdoor walks and parks where people are not stationary, are moving and can respect social distancing would reopen.

- Travel restrictions would be further eased to allow people travel outside their regions. Any holidays or breaks should be taken by family units only.

-Creches would open for the children of essential workers.

-Hairdressers would open. It is understood that this would be possible only where protective equipment is available.

The “later phases” would see the wider reopening of the economy – such as pubs and offices – again if social distancing is implemented.

-Schools, college and other educational facilities are expected to reopen in September, complying with social distancing rules.

- Creches for children of non-essential workers would open on a staged basis – such as one day a week from the start.

-Mass gatherings of over 5,000 people have already been effectively cancelled until September.Guidance around these events is unlikely to be provided until much later in the year, similar to family events such as weddings.

-Cocooning is also expected to last for the foreseeable future, until vaccines or treatments for Covid-19 are found.

It is understood that detailed guidance will be given for workplaces in areas like social distancing and cleaning protocols; as well as around canteens and other gathering places. Office workers will be encouraged to work from home, and flexible working hours will also be encouraged when offices return to avoid overcrowding on public transport.

Builders hope to restart the construction industry by picking up work in almost complete sites, before moving to outdoor work on sites such as housing estates and then moving to new estates. Minister for Business Heather Humphreys told the Dáil all businesses must adhere to the guidelines when they re-open. She said they would be backed up “through inspections and enforcement using the full suite of resources available across the State”.

Want more detailed information on schools, restaurants, holidays, businesses, the construction sector, the economy, or wondering what the experts are saying about lifting restrictions? Simon Carswell’s indepth read Lifting the lockdown: what are the plans? has it covered.