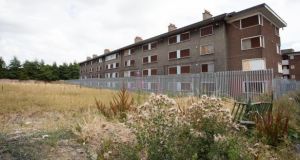 O’Devaney Gardens is a 1950s flat complex that was due to be redeveloped under a public-private partnership. Photograph: Tom Honan

The developer behind a controversial co-living development in Dún Laoghaire has been selected as the preferred bidder for the O’Devaney Gardens regeneration scheme, Dublin City Council has said.

The plan is for 824 residential units to be built on the site near the Phoenix Park, with construction due to be completed within four years.

A report on the plan, presented at the council’s central area committee meeting on Tuesday, announced Bartra Capital as the preferred developer.

The plan will see half of the 824 units being private – 30 per cent (192) as social housing and 20 per cent (165) as affordable housing. Some 56 of the houses are already under construction as part of a separate deal with Careys Construction.

The council’s report says the development will not feature any student accommodation, shared accommodation or studio apartments.

Bartra’s planned development of a 208-unit co-living scheme on the site of the former Christian Brothers school in Dún Laoghaire has proven controversial. The scheme includes a provision for communal kitchen facilities that would be shared by up to 42 residents. Local TD Richard Boyd Barrett has likened the development to a “modern tenement” whereas Bartra describes co-living as an “innovative form of accommodation”.

Hugh McKenna, a senior executive officer in the council, said the current plan had no scope for windfall profiteering by flipping the land, which is when a site is sold on after securing planning permission. He also said there was no scope for developers to sit on the land and wait for the value to increase.

Mike Flannery, chief executive of Bartra Capital, said he was not in a position to say how much the firm stood to make from the project as it was a “commercial matter” and because “there isn’t a legal agreement signed”.

“We’ve been chosen as the most economically advantageous, so you can probably say on the back of that we must be making less than everybody else that’s in for it,” he added.

The report will be voted on at the council’s monthly meeting in October.

O’Devaney Gardens is a 1950s flat complex that was due to be redeveloped under a public-private partnership between the council and developer Bernard McNamara. However, after several delays the deal collapsed in mid-2008 despite most of the almost 300 council flats having been vacated by that time in preparation for the scheme. Demolition of the vacant blocks began in September 2008 after a period of vandalism and violence there culminated in a stand-off with gardaí.

O’Devaney Gardens will be the first project developed under the council’s Housing Land Initiative, which aims to provide a mix of social, affordable rental and starter homes on State-owned lands.