Smear test review results to be communicated to over 1,000 women 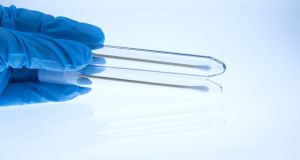 The HSE has said that where there is a significant discordance between a woman’s original smear tests and the results as provided in the RCOG review, it will provide access to a package of State supports, including a medical card and counselling. Photograph:iStock

The HSE has begun the process of communicating the results of an independent review of smear tests to over 1,000 women who developed cervical cancer.

A package of advance information about the Royal College of Obstetricians and Gynaecologists (RCOG) review was sent out to the women last Friday. It sets out options available to them for receiving the results of the review of their smear tests.

From next week, the 1,051 women involved will receive either a letter setting out their personalised smear test history under the CervicalCheck screening programme, or the offer of a meeting with a specialist at which this history will be provided.

They may also choose to receive a letter, followed by a one-to-one meeting with a specialist; or not to receive any communication at all.

A dedicated HSE information help line has been set up on Freefone 1800 832191 to assist women select the option that best suits them.

The review by RCOG in the UK was set up last year following controversy over a more limited HSE audit of smear tests that showed differences between the audit results and those previously provided to the women involved.

The HSE has said that where there is a significant discordance between a woman’s original smear tests and the RCOG results, it will provide access to a package of State supports, including a medical card and counselling.

These are currently available only to the 221-plus group of women who were affected by the earlier HSE audit of tests.

The woman may also be entitled to make a claim under the tribunal being established by the Government in response to last year’s CervicalCheck controversy.

Anne O’Connor, chief operations officer of the HSE, said it had chosen to prioritise “appropriate engagement” with the women “as opposed to moving through the process as quickly as we might like”.

Women with the greatest medical needs would be offered appointments first, from the end of next week, for an eight-week period.

“After that, all other meetings will take place. This means that it may take longer to meet some individuals, but we will try to facilitate everyone as soon as possible,” Ms O’Connor said.

An aggregate report summarising the findings of the review of the women’s test history will be provided by RCOG to the Minister for Health at the end of next month, after the individuals reports are communicated.

The 221-plus patient support group said on Tuesday it was important to support the process of communication with the women involved directly in the RCOG review “to give them the time and space required to decide what they need”.

“The women involved in the RCOG process have waited over a year for an outcome from this independent review of the accuracy of the reporting of their previous cervical smears. In bringing that wait to its full conclusion, it is important that they get absolute clarity.”

The review, which takes in both the 221 group of women at the centre of last year’s controversy over CervicalCheck, and a separate cohort of women whose cancers were notified to the National Cancer Registry, was commissioned in May 2018 with the aim of providing a comprehensive overview of the screening history of all women diagnosed with cervical cancer over the past decade.

However, there were delays in setting it up and it is unlikely to be able to provide the desired comprehensive overview due to a consent rate of 63 per cent among the women who were contacted.