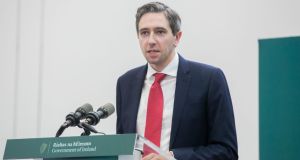 Minister for Health Simon Harris: ‘These platforms can be a powerful tool for good, or they can be a vehicle for falsehoods and lies, and they need to decide what side they want to be on.’ Photograph: Gareth Chaney/Collins

Social media companies have to decide “which side they are on” in the vaccine debate and should consider closing accounts and web pages that spread false information, Minister for Health Simon Harris has said.

Mr Harris said he had invited Twitter, Facebook, Google and other companies to a “summit” to explain what they can do to support public health and clamp down on misinformation.

“These platforms can be a powerful tool for good, or they can be a vehicle for falsehoods and lies, and they need to decide what side they want to be on,” he said on Tuesday at the announcement of a vaccine alliance aiming to boost the uptake of childhood vaccines and reduce parental hesitancy about them.

Immunisation rates have fallen in recent years and that has been linked to anti-vaccine sentiment online and large variations existing in uptake rates in different parts of the country.

Mr Harris said social media companies have to decide if they want their platforms to “be on the side of public health, or to be exploited for lies and disinformation”. He also challenged fellow TDs not to allow themselves to be “used” by asking “irresponsible” parliamentary questions about vaccines.

Responding, Facebook said it and Instagram had an action plan to combat vaccine misinformation. When this is identified, rankings are reduced and links removed from search pages. Hashtags with verifiably false information are also being blocked.

But a spokesman clarified that “misinformation about vaccines is not the same as the anti-vax movement. The concept of people who have opinions against vaccines is not something we’d take action on”.

The Minister said the need for accurate, evidence-based information outweighed the need for “false balance” in the debate about vaccines and that efforts needed to be redoubled in order to save lives.

“Vaccination rates across the country are falling and diseases we had consigned to the history books are now making a comeback. We cannot afford to do nothing. We cannot allow the success of our childhood immunisation programme become its enemy,” he said.

“This alliance will build on the success we have had with the HPV vaccine where rates increased from 51 per cent to 70 per cent in a short period of time and it will ensure parents have accurate, evidence-based information about vaccinations.”

He pointed out that Ireland has seen about 1,000 additional cases of mumps this year compared to last, and more than 50 cases of measles. “It shows the need for this alliance to push back against vaccine hesitancy.”

Asked if the initiative has a budget, a Department of Health spokeswoman said funding to support the work of the vaccine alliance “will be considered as part of the budgetary process for 2020 and 2021”.

The alliance includes a number of organisations including Barnardos, Unicef Ireland, Science Foundation Ireland, Pavee Point and the Union of Students of Ireland, as well as parents, doctors, nurses and pharmacists.

While those who are not vaccinated are at an increased risk of catching an infectious disease, they also risk passing the infection to others. This includes infants who cannot be vaccinated until they are one, and the immuno-compromised.