Civil servants ‘will not be subjected to a witch hunt’ 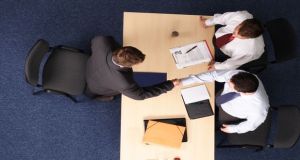 The Association of Higher and Civil Public Servants said its members will not be “scapegoated” over failings in the Department of Justice. File photograph: Getty Images

The representative body for senior civil servants has said its members will not be subjected to a “witch hunt” for the sake of political expediency.

The Association of Higher and Civil Public Servants (ACHPS) also said its members will not be “scapegoated” over failings in the Department of Justice.

The blunt statement comes after Dáil comments from Taoiseach Leo Varadkar this week in which he promised to hold senior officials personally accountable over recent justice controversies.

The responding statement marks a significant escalation of an unprecedented public row between senior officials and the political system.

While the ACHPS does not represent secretaries general, the most senior officials in government departments, its members comprise over 3,000 senior officials and managers in the civil service and semi-state sector.

In a statement, it said its members are “held to account” regularly, such as at Oireachtas committees and will also “co-operate fully” with the Disclosures Tribunal, which is investigating allegations of a smear campaign against Garda whistleblower Maurice McCabe.

“We take issue with any use of broad brush characterisation of the work of the civil service. It does a huge disservice to the thousands of people who work on a daily basis to support government, the public and the agencies of the State.

“Civil servants are entitled to due process and should not be subjected to a witch hunt or a concerted campaign of denigration ahead of the inquiry. Nor should they be scapegoated for the purposes of political expediency or in an attempt to overtly simplify complex issues and interactions.”

Earlier this week, Mr Varadkar claimed he ordered a trawl of all documents in the Department of Justice because he was “not confident or satisfied that the department had released all the information it had” and because he had to correct the Dáil record.

The trawl uncovered further emails within the Department of Justice on the legal strategy pursued by former Garda Commissioner Noirín O’Sullivan against Sgt McCabe at the O’Higgins Commission of Investigation, which investigated allegations of Garda malpractice.