Adopted children must have right to contact with their birth families 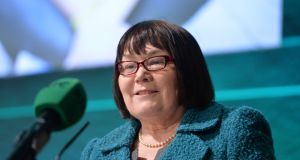 Norah Gibbons, chairwoman of Tusla, the Child and Family Agency: it could be hugely beneficial for children to meet their birth parents and “get an explanation” as to why they were in care. Photograph: Alan Betson

Adopted children must have the right to contact with their birth families, leading advocates for children’s rights have said.

Among those making the call, at a conference hosted by the Adoption Authority of Ireland (AAI) in Dublin on Thursday, were Norah Gibbons, chairwoman of Tusla, the Child and Family Agency; Tanya Ward, chief executive of the Children’s Rights Alliance, and Orlaith Traynor, solicitor and deputy chair of the AAI.

The conference, on the impact of the new Adoption Amendment Act 2017, heard calls for the introduction of semi-open adoptions, where birth families have ongoing contact with the adoptive families, and of open adoptions where there can be contact between the adopted child and their birth family – if the child wants it.

The Act puts the best interests and the voice of the child at the centre of adoption legislation and allows single, cohabiting and married adults to adopt. It also gives greater effect to birth fathers’ right to be consulted in any proposed adoption.

While welcoming the Act, Ms Ward said it was now time to look at “post-adoption supports” including legislating for open- and semi-open adoptions. These were crucial to provide adopted children with opportunities to know all they needed to feel secure in their identities. Too often, she said, after huge support leading up to an adoption, children and their adoptive families were left to “fall off a cliff”.

Echoing her, Ms Gibbons said the traditional “clean break” adoptions, where all contact with the birth family was severed, could be damaging for children. She said it could be hugely beneficial for children to meet their birth parents and “get an explanation” as to why they were in care.

“This is painful stuff, but it is part of building the child’s identity, that we are all talking about. They need to put down roots and those roots need to be deep into the ground.”

She also called for financial supports for adoptive families where necessary, after adoption, saying many will have been in receipt of a foster care allowance before. Poorer families may feel they couldn’t afford to adopt, meaning adoption could be the preserve only of better-off families.

Ms Traynor said birth fathers’ consent was required before a child could be placed for adoption. She outlined “exceptional” circumstances where this could be set aside in the best interests of the child, or where a birth mother refused to identify the birth father.

“Generally...where a father has, albeit intermittently, played a role in a child’s life it is prudent to ensure that he has at least received notice of adoption proceedings, not least in order to stave off any further challenge to the order. “

There was a need to “look again at clean break adoptions” and consider whether adoptive relationships should “involve more or less continuing contact with the natural parent, geared always to be best interest of the child”.