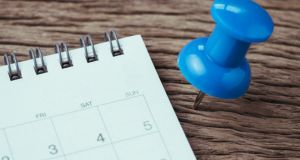 Flexible working hours and the right to accrue flexi-leave were withdrawn for all assistant principals except for staff already availing of them under the Haddington Road Agreement in 2013. Photograph: iStock

New middle-ranking civil servants have lost a claim to be entitled to similar flexi-leave arrangements as longer-serving colleagues.

The Civil Service Arbitration Board has recommended assistant principal officers appointed after July 1st, 2013 should not have a right to accrue and take leave under flexible working arrangements as sought by their trade union.

In a ruling on a dispute between the Association of Higher Civil and Public Servants and the Department of Public Expenditure and Reform, the Board said no concession should be made for the reintroduction of flexi-leave for such civil servants.

Flexible working hours and the right to accrue flexi-leave were withdrawn for all assistant principals except for staff already availing of them under the Haddington Road Agreement in 2013.

The AHCPS subsequently submitted a claim for access for newly appointed assistant principals to flexible working arrangements in 2016 which was successful, apart from being allowed to accumulate flexi leave.

In a submission to the board, the trade union said the removal of flexi leave was for ideological reasons.

The policy specifically targeted management grades as if family friendly policies should not apply to them and it contravened natural justice by not affecting any other grades, the union argued.

Department officials claimed the measure was necessary as assistant principals were in critical posts for ensuring quality service delivery to the public and the use of flexi-leave was not appropriate for such a grade.

They pointed out assistant principals also differed from lower grades as they were not eligible for overtime.

The Department said it expected assistant principals should have sufficient autonomy to manage their own working time to fulfil the responsibilities of their role.

Outlining its ruling the Board said the restriction on flexible working arrangements for assistant principals was the subject of a specific sentence in the Haddington Road Agreement which had not been altered by any subsequent pay agreement.

The board also noted that accrued flexi-leave was not applied uniformly across the civil service.

“As a result any perceived inequity felt by the assistant principal officers appointed since 2013 cannot be regarded as discriminatory as it is not something that is available to all assistant principals employed before that date,” the CSAB said.

The CSAB encouraged both sides to research the issue further on how it would impact on service delivery and promotion if permitted with a view a fresh claim being reintroduced as part of talks on any future national pay agreement.