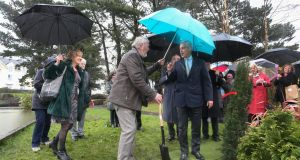 Rahm Emanuel, the mayor of Chicago, visited the Circle of Life Garden in Salthill on Tuesday after he was conferred with an honorary degree at NUI Galway. Photograph: Joe O’Shaughnessy

US mayor of Chicago Rahm Emanuel has said that cities have to “step forward” and “fill the political void” left by national governments and international entities.

Mr Emanuel, who served as White House chief of staff during the Obama administration, predicted that in 20 years’ time the “city state” would be a far more important political and economic force than the nation state.

One of the greatest challenges facing the 21st century political system was to meet the needs of those who feel excluded from the current economic system, he said, speaking at NUI Galway (NUIG) where he received an honorary doctorate on Tuesday.

Galway and Chicago were among about 100 cities in the world which owned the “economic, intellectual and cultural” energy fuelling the global economy, Mr Emanuel noted.

These cities are at an “inflection point”, reflected in the Brexit vote and in elections in Europe which showed that people no longer had faith and confidence in politics, he said.

City leaders have a responsibility to ensure there is “inclusive”, rather than “exclusive”, growth, given that wealth and poverty reside just a few miles apart in urban areas, he said.

Mayors must use their “power for the powerless” and their “voice for the voiceless” in battles on immigration, on climate change and in the battle for economic opportunity and the threat of inequality, he said.

“Cities have a responsibility . . . to take action collectively,” he said, and “sister city programmes” were not just “signatures about more flights” or about festivals, but also about economic and culture exchange, he said.

In a citation at NUIG, Irish Centre for Human Rights director Prof Siobhán Mullally spoke of Mr Emanuel’s grandfather’s journey from Moldova to the US as a 13-year-old child, fleeing the pogroms of Jewish communities in Eastern Europe.

His grandfather had been “sent by his family to seek safety and refuge, to a third cousin that he did not know, and to a country and city whose language he did not speak,” she said.

“Mayor Emanuel has repeatedly reminded us that we are better off today because there were those who were righteous, who spoke out and challenged the tyranny of despots, and denials of rights,” she said, noting that he had introduced and continued to defend the “city of sanctuary welcome ordinance” in Chicago in 2012.

“Immigration laws define and demarcate those who are inside and outside of the polity, and the deportability of the migrant always limits the enjoyment of rights,” she said.

“These limits, and the burdens it brings are understood by Mayor Emmanuel, who has spoken of the essential sadness of exile, the opportunities and obligations that come with receiving refuge, and the importance of trust between the state, the city and its people, whether of documented or undocumented status,” she said.

Mr Emanuel, who was accompanied on his visit to Galway by Senator Billy Lawless, also marked organ donation awareness week by planting a yew tree at the Circle of Life garden in Salthill. Senator Lawless is co-chairman of the Galway Chicago Sister Cities Committee, and the Circle of Life garden was sponsored by both Galway City Council and Galway/Chicago Sister Cities International.