Citizens’ Assembly: reaction from both sides of abortion debate 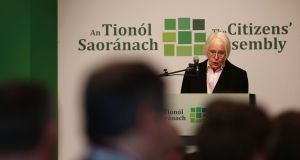 Groups seeking the repeal of the Eighth Amendment applauded the vote by a panel of citizens to change the State’s abortion laws, while anti-abortion groups condemned the consultative process as one-sided.

Pro-choice advocates called on the Government to push ahead with plans to set up a joint Oireachtas committee to consider the next steps after almost two-thirds of Citizens’ Assembly voted by a margin of 64 per cent to 36 per cent to recommend that abortion be available with no restriction.

Anti-abortion groups argued that the poll of 87 citizens, randomly selected, should not be taken as reflective of the Irish population at large and that opinion polls had found that the public was not in favour of a liberal abortion regime, as available in the UK and supported by the majority-vote of the assembly.

“The assembly is not what matters,” said Niamh Uí Bhriain of the anti-abortion Life Institute, who does not believe the public would vote for the repeal of the abortion ban. “We already have an assembly and it is called Dáil Éireann and at the end of the day the people will vote on the issue.”

Niall Behan, chief executive of the Irish Family Planning Association, said the assembly had provided the Oireachtas committee, that will consider the assembly’s final report and potentially pave the way for a referendum on the amendment, with “an extremely strong imperative for change”.

The National Women’s Council of Ireland hailed the vote as “a historic step to women’s equality” and said that political responsibility and leadership was needed to provide for abortion in Ireland.

“It is clear when fully armed with the relevant facts and when they have had the opportunity to consider them, the Irish public recognises that the Eighth Amendment does not work and is reflective of an Ireland that we wish to put behind us,” said Orla O’Connor, the council’s director.

Amnesty International described the assembly’s vote as “a truly momentous leap forward for the human rights of women and girls in Ireland”.

The Pro Life Campaign argued that the vote “would result in abortion on demand” if the recommendations were enacted.

“Prof-life supporters will understandably be disappointed with today’s result, but it’s not reason to become disheartened,” said Cora Sherlock of the Pro Life Campaign.

She accused the assembly of taking a “one-sided approach” by not hearing from parents who say they owe the life of their child to the amendment, when they had heard from a doctor from the British Pregnancy Advisory Service which carries out abortions for Irish women.

A spokeswoman for the assembly declined to comment on the accusations of bias. Assembly chair, Mrs Justice Mary Laffoy, had previously said that the doctor contributed in a personal professional capacity as an expert in her field at the request of members of the assembly.

Gerry Edwards of TFMR Ireland, the group which advocates terminations to be available to parents in cases of fatal foetal anomalies, said the assembly’s findings were “very positive”, but expressed concern with the limit of 22 weeks’ gestation when parents may only become aware of anomalies with the 20-week scan.

“With a 22-week limit, parents may feel under pressure purely as a result of the time frame to make a decision to terminate which they may not be comfortable with,” he said.