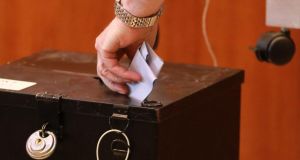 The lights went out on the Eighth Amendment as we know it at Malahide this weekend.

The 91 members of the Citizens’ Assembly gathered at the Grand Hotel had gained an “almost uniquely comprehensive understanding” of the issues relating to abortion in Ireland, the assembly’s chairwoman, Ms Justice Mary Laffoy, told them at the start of their deliberations on Saturday. She acknowledged that everybody sitting in judgment on the Constitution’s ban on the termination of pregnancy felt the weight on their shoulders, “and I include myself in that”.

The result was delivered in silence just after noon on Saturday.

Over four weekends, and having listened to both perspectives on a polarising subject, the members voted by 79 to 12, or more than six to one, to reject article 40.3.3, in which, under the Eighth Amendment, the State “acknowledges the right to life of the unborn and, with due regard to the equal right to life of the mother, guarantees in its laws to respect, and, as far as practicable, by its laws to defend and vindicate that right”. The vote was a “clear mandate to change the status quo”, the judge said.

The air conditioning stopped whirring, the live feed was cut and everybody was left in the dark

Three minutes later the power failed at the hotel and around Malahide. The air conditioning stopped whirring, the live feed was cut and everybody was left in the dark.

The former minister for justice Nora Owen, who has attended some of the sessions with her sister, the former MEP Mary Banotti, remarked that the last time the lights went out in the north Co Dublin town was during the 1982 general election, when Charles Haughey’s agent, Pat O’Connor, was alleged to have voted twice in the village.

The lights soon came back on, and the deliberations resumed.

The first vote had been broadly in line with opinion polls, but the result of the second shocked many pro-choice campaigners: members voted 50-39 to recommend that the Eighth Amendment be reformed or amended rather than repealed.

Repeal might lead to legal uncertainty, and decisions taken by the Oireachtas might be challenged in court

But some of those campaigners may have missed Ms Justice Laffoy’s advice to the assembly: repeal might lead to legal uncertainty, and decisions taken by the Oireachtas might be challenged in court.

The implications of this were not clear to everybody. One citizen said she had voted to reform rather than repeal given the chairwoman’s advice. “I have spoken to a few people who were confused after they voted,” she said.

The members then opted to empower the Oireachtas to deal with the abortion issue. One of the assembly’s legal advisers, Oran Doyle, said that option gave legal clarity to the houses’ role in setting abortion law.

Fractious exchanges at the end of a long day on Saturday prompted Ms Justice Laffoy to ask the members to regain their sense of collegiality.

On Sunday the assembly debated the circumstances in which abortion should be allowed. The chairwoman’s warning that their final session would be complex and difficult was borne out by the final paper, which presented 40 options.

By the end of their deliberations the choices on the ballot paper had swollen to 65. The members approved a proposal to include socioeconomic circumstances, and the final option was changed from “abortion on request” to “no restriction as to reason”.

The final session ran over by two hours because of the complexity of the ballot.

The results were more liberal than most would have imagined likely

The results were more liberal than most would have imagined likely. The Citizens’ Assembly approved the availability of abortion, in all 13 circumstances they considered, by wide margins.

The members of the assembly were chosen to represent the Irish public. They had no agenda to start with, but by the end of their deliberations they had effectively mandated the Oireachtas to legislate for abortion on demand.

Ms Justice Laffoy said it was a “clear map” for politicians.