Chocolate Bastille stormed in Dublin for 14th of July 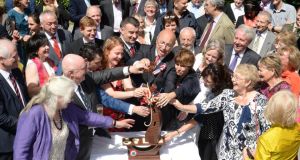 French ambassador to Ireland Jean-Pierre Thebault and his wife Aurore are joined by their guests at the French ambassador’s residence on Ailesbury Road to storm a chocolate Bastille. Photograph: Cyril Byrne/The Irish Times

Representatives from the Irish Defence Forces as well as a group of Irish teenagers have taken part in a special Bastille Day event in Paris.

Bastille Day, or La Fete Nationale as it’s known in France, commemorates the 1789 storming of the Bastille by the people of Paris, symbolically putting an end to the absolutism of Louis XVI’s monarchy.

The French ambassador to Ireland Jean-Pierre Thebault said this year marked a particularly special commemoration, taking place on the centenary of the outbreak of the First World War.

“France will remember and commemorate the courage and sacrifice of all men and women who lost their lives for the defence of freedom and dignity,” he said.

“And France pays today a special tribute to the tens of thousands of Irish men and women who died in her defence in the north of France.”

He said that representatives from the Irish Defence Forces along with four Irish teenagers participated under the Irish flag at a special parade in Paris for the 14th of July.

The Irish deputation was one of 80 such groups from countries around the world. A spokesman from the Irish embassy in France said this was the first time the French held an international event to mark the day. Newly appointed Minister of State for the Diaspora Jimmy Deenihan was in attendance at the Paris parade which culminated with the release of a number of white doves.

The ambassador was speaking during the annual reception in the French Embassy on Ailesbury Road in Dublin where he celebrated the “flourishing French community” in Ireland.

He paid tribute to the more than 10,000 French citizens “all actively participating in Irish life, in the communities, in art and business; more than 300 companies employing around 14,000 people who contribute to the Irish economic recovery.”

He added: “We are looking for more French to come to Ireland, to more French companies developing business ties with Irish and international companies to join forces and win markets all over the world.”