Childcare package to include reopening grant and funds to upgrade buildings 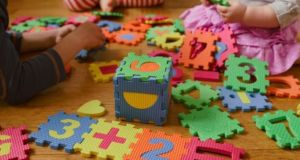 The Government is finalising a substantial financial package for the childcare sector to ensure it is in a position to reopen and facilitate a wider return to work at the end of the month.

Among the financial measures being considered are a wide range of “reopening grants”, while some subsidies which had been suspended while crèches were closed will be restarted.

Capital grants to enable childcare operators to invest in premises to comply with new public health rules are also under discussion, it is understood.

An announcement from the Department of Children and Youth Affairs had been anticipated last Friday, but sources in the department now say the delayed confirmation of the package is “imminent”.

Sources in the childcare sector are also hopeful of an ongoing top-up wage subsidy in addition to the Government’s wider wage subsidy scheme.

A spokesman for the department said: “A funding model to support the early learning and care and school-age childcare sector is currently being finalised . . . the Minister hopes to finalise the plan in the coming days.”

It had been hoped Cabinet would sign off on the scheme on Tuesday through an incorporeal meeting, but that did not proceed. Approval could come as soon as Wednesday, sources said.

Representatives of the childcare sector have warned they will not be able to open on June 29th unless the Government makes a decision this week about funding.

It is understood the funding package will include reopening grants, the restoration of some subsidy funding and capital grants to assist with social distancing, such as wall dividers and Perspex tables.

Childcare sector sources are also hopeful of an extension of the State’s sector-specific wage subsidy scheme.

The aim is to have the sector up and running for a full return to work in late July and early August.

Association of Childhood Professionals (ACP) chairwoman Marian Quinn said time was running out if a return to childcare facilities is to be allowed on June 29th.

“If the announcement is not this week, the 29th would not be manageable. At the end of the week it is only two full weeks before decisions are made.”

Frances Byrne, director of policy and advocacy at Early Childhood Ireland, which represents 3,800 childcare members nationwide, said childcare facilities are facing “huge costs to restructure their premises and business models and to ensure their staff are kept firmly employed”.

Elaine Dunne, owner of the Treehouse Montessori in Kilternan, Co Dublin, said she has been unemployed for the last 10 weeks and her fixed outgoings, such as rent and insurance, are €10,000 a month.

“We are looking for sustainability to help us to pay for the changes we need to make within our service.

Siobhán Geissel, the manager of the Kidz Akademy Creche and Preschool in Kilcullen, Co Kildare, said she expects half of the 100 children attending the facility to return at the end of June.

She said she has been unable to tell parents what the fees will be for their children without confirmation from the Government as to what funding they intend to provide.

She believes Government support will be essential for the sector to be sustainable during the Covid-19 pandemic.

It comes as the National Public Health Emergency Team (NPHET) confirmed another nine deaths associated with Covid-19 in the State, bringing the total to 1,691. A further nine cases were also diagnosed, meaning 25,215 people have been confirmed to have the disease.

Meanwhile, a senior source said the Government could potentially send free face masks to households ahead of the next flu season. A source said while such a move had not yet been considered “all options will be examined and reviewed”.