Ryanair sells insurance that does not cover non-essential travel 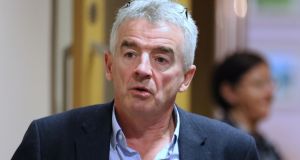 Ryanair CEO Michael O’Leary: The airline has been increasing pressure on the Government to ease restrictions on people flying to and from Ireland by suggesting there has been a surge in Irish bookings for destinations in the sun for July and August. Photograph: Nick Bradshaw

Ryanair is selling travel insurance policies on its website which will be invalidated if people fly with the airline for non-essential journeys while Government restrictions on travel overseas remain in force.

A clause in the travel insurance policy offered by the airline makes it clear that people will not be able to make claims if anything happens while they are overseas if they have travelled outside of Ireland contrary to advice from the Department of Foreign Affairs.

The relevant exclusion clauses say cover will not be offered for any claim “arising directly or indirectly from you travelling against Foreign Office (or any government body) advice or where it is deemed unsafe for you to travel”.

As it stands the official advice from the Government is that non-essential journeys overseas should be avoided.

Travel insurance exclusions denying cover to people who travel contrary to official guidance are the norm across the sector. But it is somewhat unusual that many of the insurance policies sold could immediately be invalidated once a person leaves the country.

When contacted about this the airline declined to respond to queries from The Irish Times.

In recent days Ryanair has been increasing pressure on the Government to ease restrictions on people flying to and from Ireland by suggesting there has been a surge in Irish bookings for destinations in the sun for July and August.

In an interview published on Monday, intended for a UK audience, chief executive of the airline Michael O’Leary said British people were booking outbound flights for holidays despite quarantine requirement, but Europeans were not coming to Britain.

Asked whether Ryanair would cancel July and August flights if the UK quarantine remained in place during those months, O’Leary said: “No, because the flights are full outbound of the UK. British people are ignoring this quarantine, they know it’s rubbish.”

A spokesman for the airline told The Irish Times that the same trend was being noted amongst Irish customers, despite a quarantine requirement here, as well as an official advisory from the Department of Foreign Affairs warning against non-essential travel.

“The same applies [in Ireland]. We’re seeing a surge in bookings to holiday destinations such as Spain, Portugal and Italy, both from the UK and Ireland,” the spokesman said.

While the airline talks about a surge in bookings to European tourist destinations for the weeks ahead, the reality is that many of the seats on flights bound to Spain, Portugal and Italy this summer will have been sold to Irish families who had plans in place long before the pandemic hit.