Enda Kenny on grief in the age of coronavirus pandemic 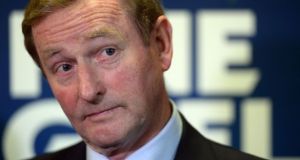 Like most people who have spent a lifetime in politics, former taoiseach and Mayo TD Enda Kenny was no stranger to funerals and graveyards during a 45-year career.

Reflecting yesterday, Mr Kenny said there were “literally thousands of occasions over the last 45 years” where he and others in politics had “seen tragedy and grief in all its forms”.

Today, Mr Kenny will be unveiled as “the voice” of the Irish Hospice Foundation’s new national bereavement counselling service for those suffering loss.

The support line – the first of its kind in the country – was set up by the foundation to provide comfort to those who were bereaved during the coronavirus pandemic, but forced to grieve alone.

Irish funerals are public events, with time-honoured traditions and rituals that bring comfort, where friendships are strengthened, acquaintances renewed and communities are unstinting in their support.

From Monday, some of the curbs on funerals have been relaxed. The number of mourners has risen from 10 to 25, but there are still no wakes, no house visit, no shaking hands or embraces.

Having agreed to voice radio advertisements for the service, Mr Kenny said grief, if not properly dealt with, can prolong agonies and dominate people’s lives.

“Sometimes it is so deep that it takes a long time for people to kind of look at the rest of their lives,” he said, “to get that out of them is what the hospice is doing here”.

The foundation “bring out that grief” and that is really important for their mental health and their wellbeing, he told The Irish Times, ahead of the launch of the campaign.

“Ireland does death, bereavement and grief very well,” he explains. “We understand what the lump in the throat is, what the human tear is and what it is to talk and talk it out.”

Mr Kenny’s own political life was shaped by grief. His father Henry Kenny died aged 62 in September 1975 and the young Enda Kenny, then just 24, won the seat in a byelection.

Henry Kenny had cancer for a short time. “You never think that people will die, but when it came, it came as a shock,” he said. The six weeks between his father’s death and his own byelection win are still a “blur” in his mind.

During the years afterwards, he attended countless funerals – part of the duty of respect required and expected of rural deputies, if derided by others remote from such surroundings.

Sometimes, the greatest respect that could be shown for the departed, and those left behind were on those “hundreds of occasions” where he sat in kitchens learning when to speak, or, as importantly, when not to say nothing at all.

In 2011, the year he became taoiseach, he learned of the passing of his mother Eithne, who was 93, as he was onboard the LE Róisín as it rounded Tuskar Rock in a gale.

They had just passed the lighthouse when the call came through. Her own father had been a lighthouse keeper. Nearly a decade on, Mr Kenny remembers the moment.

It is something to be able to see funeral remotely on the web, he said, but no substitute for the real thing. “You have to go into kitchens, you’ve got to hug them and shake hands with them.

“We are all on the same conveyor belt and it can be so difficult for families. Some people are grieving on their own and are absolutely lonely. They need that human contact,” he said.