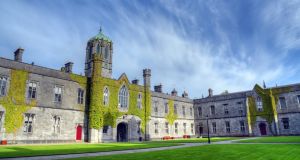 Five of Ireland’s top six universities have climbed up the latest set of global rankings with Trinity College Dublin placing just outside the top 100.

The QS (Quacquarelli Symonds) World University Rankings indicate that the improved performance is linked to a stronger academic reputation and a higher proportion of international faculty members.

The QS rankings are based on a number of key indicators, including academic and employer reputation, staff-student ratios, citations per faculty and the international nature of faculty and staff.

Irish universities performed strongest under the “international faculty” heading (the proportion of international staff) and improved most under “academic reputation” (based on a survey of academic staff across the globe).

They underperformed under the measure of institutional research impact, or citations per faculty.

The improved performance overall comes at a challenging time for the sector due to long-term funding issues and disruption linked to the coronavirus pandemic.

The Higher Education Authority estimates that universities are facing a €500 million blackhole this year and next due to a dramatic fall-off in international student numbers and related factors.

The Department of Education has signalled that only limited funds may be available.

Trinity’s dean of research, Prof Linda Doyle, said the university was pleased with its improved ranking despite an increasingly challenging landscape.

“All Irish universities have performed well in these rankings, especially when considering the continued under-investment and significant challenges we face in competing with other universities around the globe that are more robustly supported by government,” she said.

She said significant and sustained improvements can only be achieved if there is a long-term increase in investment.

“This is even more urgent in light of the unprecedented challenges we face as a result of the Covid-19 pandemic. These rankings show that Ireland’s universities are internationally respected and highly regarded, but that will not continue without significant sustained and meaningful investment from government.”

UCD president Prof Andrew Deeks said while he was pleased to see an improvement in the rankings, he also warned that the pandemic will pose serious challenges.

“I am very conscious that the COVID-19 pandemic is having a dramatic impact on the entire higher education sector across the world and that rankings such as QS, that place a strong focus on internationalisation, will be very much affected in the coming year as we grapple with travel and mobility restrictions,” he said.