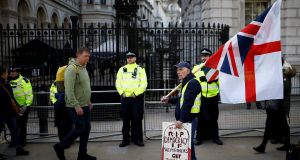 A Pro-Brexit protester demonstrates outside Downing Street in London at the weekend. Photograph: Henry Nicholls/Reuters

Michel Barnier offers the UK the option of allowing Great Britain out of the backstop. In Pavlovian fashion, Brexiteers cry foul, accuse EU negotiators of bad faith and engage in a broader blame game: it’s all Brussels fault.

For Brexit, much depends on whether we understand both the meaning and the context of my first sentence. Anyone outside government could be forgiven for neither knowing nor caring. The worry is that few people inside the British government – or Parliament – seem to get it. That, I think, is at the heart of the Brexit problem: the standards we demand of someone who, say, we expect to repair our washing machine, are not applied to politicians. Or, if minimum professional standards are expected, they all too frequently fail to be delivered.

Over 200 years ago, Adam Smith explored the significance of specialisation. He was one of the first economists to point out the power and potential of a narrow focus on doing what we are good at, experienced in and qualified for.

That specialisation gave us the wonder of economic growth and the world as it looks today. As a result, few of us know how to open the bonnets of our cars or how to fix a cracked iPhone screen. But that doesn’t matter, because we know who can.

Checks and balances are built into the system to make sure that minimum standards in critically important areas are maintained. Sometimes, laws are passed to make sure we don’t get ripped off.

Nobody asks to see their doctor’s qualifications or testimonials prior to a consultation. But no minimum standards are set for politicians; no qualifications, no exams, no authorisations, no licences. Not even a professional standards body. The two most important jobs in the world – politics and parenting – can be done by experts or charlatans.

The list of recent failures, mistakes and evidence of incompetence is a long one. It’s almost too easy to start with the hapless transport secretary Grayling. And then quickly move on to the serial, jaw-dropping utterances of the Northern Ireland secretary. And, of course, the management of the Brexit process ever since the referendum.

Democracy is supposed to sort this out: the hacks and the incompetents are voted out of office. But not before they potentially do great harm. And if your political opposition is even more useless than you are, losing the next election is not inevitable. Just look at the Tory lead in the opinion polls and ponder the surreal state of British politics.

One of the basic requirements of a competent politician is the ability to negotiate. Skills in this area are not that difficult to acquire. For instance, gain some knowledge of the other side.

In the case of talks with Brussels, be aware of the structures, mechanisms and even raison d’etre of the EU. The basic premise of negotiation: be clear, at least in your own mind, about what you want. Have a list of “nice to haves” but a clear understanding of your “walk away price”: the minimum requirements needed for you to sign up to a deal. There is no evidence that any of this occurred to the Brexiteers.

One of the many stunning Brexit revelations is the way in which most British politicians have never bothered to learn anything about the way Brussels works. Take the phrase, “the EU is less a nation state but rather a collection of laws, rules and regulations”. As with my first sentence, most normal people would rather saw their leg off with a blunt pen-knife than engage with the detail of that assertion. But that engagement is the least we should expect from a politician, particularly one committed to negotiating both an exit from, and new relationship with, the EU.

Narcissism and self-absorption are two of the human traits most immune to logic and reason. Think about the tactics of the Brexiteers: the bad faith, the fallacies, the lies, the abuse of language, the bullying, the projection and, most recently, the drawing up of revenge fantasies. It’s all straight out of the psychiatrist’s handbook, particularly the sections dealing with narcissistic personality disorders. Debating with a narcissist is like trying to assemble an Ikea flatpack with the wrong-sized Allen key.

At this point the even-handed columnist is supposed to say that all Brexiteers are not narcissists. But most narcissistic Brexiteers will not have got this far. A perfect illustration of this is to found in the recent BBC exchange between author Will Self and Tory MP Mark Francois. Self suggested that every racist and anti-Semite voted for Brexit. He had great difficulty trying to explain to the Brexit hard-liner that didn’t mean that every Leave voter was a racist. Logic or honest engagement in debate is noticeable only by its absence.

The Brussels bureau chief of the Economist reckons that the UK after Brexit will not experience a sudden Greece-style collapse but rather a long, slow Italian-esque decline. That looks right to me.

1 ‘My rent here is so low it’s a joke’
2 This charming man: how Paschal Donohoe won the Eurogroup presidency
3 Goodbody’s planned €155m sale to Bank of China falls through
4 ‘Sad day’ for House of Ireland as tourism retailer goes out of business
5 Pharmaceutical industry signals it won’t extend drugs agreement
6 Bewley’s on Grafton Street to close permanently with loss of 110 jobs
7 Why gift a son now if it eats into his tax-free inheritance threshold?
8 Canadian gambling group cuts jobs in Dublin ahead of planned €12bn merger
9 21 years to save for a deposit in Dublin as housing crisis deepens
10 Government won’t name date for EV grants for car dealers
Real news has value SUBSCRIBE