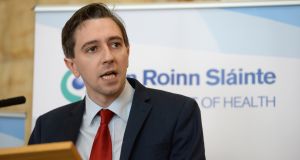 Minister for Health Simon Harris. The number of children at Our Lady’s Hospital Crumlin and Temple Street Children’s University Hospital waiting for more than four months for surgery has grown by 17%. Photograph: Dara Mac Dónaill

A Government promise that no child with scoliosis will have to wait for urgently-needed surgery looks set to be broken, with new figures showing waiting lists are rising rather than falling.

Minister for Health Simon Harris promised earlier this year that the target of a four-month wait for treatment of scoliosis would be met by the end of 2017. Former taoiseach Enda Kenny had described the target as an “absolute priority”.

Since then, the number of children at Our Lady’s Hospital Crumlin and Temple Street Children’s University Hospital waiting for more than four months for surgery has grown by 17 per cent, according to figures obtained by The Irish Times.

In March, there were 124 children waiting more than four months for spinal fusion or surgery at the two hospitals, but by last month this had increased to 145, the figures from the Health Service Executive show.

The target was set by the HSE in an action plan demanded by the Minister following previous controversy over the length of time children have to wait for surgery to correct the abnormal curvature of their spine.

A report by the Children’s Ombudsman found the Government’s failure to deal with the delays was impacting on the rights of children.

Eilísh Hardiman, chief executive of the Children’s Hospital Group, said the target could not be achieved without outsourcing of up to 50 operations to other hospitals in Ireland, the UK, Germany and France.

Five children have been treated in the Royal National Orthopaedic Hospital, Stanmore in England, as a first step in the outsourcing of operations overseas, she said. The contract for the next stage of outsourcing is due to be signed shortly.

A new operating theatre opened in Crumlin in April and is operating three days a week. A new orthopaedic consultant post was filled this week, three months later than originally envisaged.

Asked whether the Government’s target would be achieved by December, Ms Hardiman said: “We’re working very strongly and are fully committed to having the target met but it will require a lot of effort and co-ordination.”