Varadkar ‘will not accept excuses’ for failure to improve health service 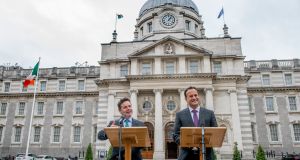 Taoiseach Leo Varadkar has said the Government will not accept any excuses for failures to deliver improvements in health services given the €1 billion additional funding provided to the HSE over the last two years.

He said the health service budget was now the largest it had ever been since the foundation of the State.

“We have also seen an increase of over €1 billion in health spending over the last two years and people are entitled to see improvements for that. We are not going to accept any excuses for failure to do so,” he said.

The Taoiseach was responding to a report in The Irish Times on Thursday which said the HSE had warned Government it was facing a projected financial deficit of €300 million this year.

The Department of Health described the overspending in the health service for the early part of the year as “extremely disappointing” and has ordered the HSE to draw up detailed plans for making savings and maximising efficiencies to bring about a break-even position.

The Taoiseach and the Minister for Finance Paschal Donohoe both indicated that the HSE would have to deal with its projected €300million overrun from within its own resources.

Speaking at a press conference alongside the Taoiseach on Thursday Mr Donohoe said the health budget was now €14.1 billion. He said he expected to see any projected health service financial deficit managed carefully and “within the context of the increased resources” which the Government had provided.

The HSE has contended that much of the projected €300 million overrun stemmed from issues outside of its control. It has argued, for example, that it has not received funding to pay for a €1,000 pay rise for health staff which the Government agreed earlier this year to bring forward by several months at a time when it was under pressure from public service trade unions. Some senior health sources argued the Taoiseach would be aware there were inefficiencies in the system due to the dominance and the associated costs of the acute hospital system and the need to move towards a greater use of primary care.

Meanwhile doctors warned that the health service would face a “financial crisis” in the months ahead if the Department of Health sought to claw back the €300 million deficit.

Irish Medical Organisation (IMO) president Dr Anne Hogan said: “Our health service is already running on empty financially and cannot endure any more cuts. It is now obvious from these latest reports of over-spending that there will be no respite from hospital overcrowding, increasing waiting lists, vacant consultant posts, emigration of doctors and under-resourced GP services. Confidence is at an all-time low. The IMO is calling for immediate action by the Department to increase resources and bring our health service back to life.”

Meanwhile Fianna Fáil said there should be no reduction in patient services to deal with the projected financial over-run. It’s health spokesman Billy Kelleher said revelations about the projected over-spending were “disappointing but not surprising”.

“Figures I received over the summer showed that spending on agency staff was €40 million ahead of projections by the middle of the year,” he said.

“It is noteworthy that the HSE says that commitments made by government in the public sector generally have not been funded for the HSE. Clearly it would be unreasonable for the government to make commitments that involve additional costs and then not fund them.

“The issues must be addressed by both the Department and the HSE and the differences sorted out. There should be no reduction in patient services. There should be less spin and more honesty about services and the need to fund them properly,” he added.