Chairty aims to provide people with security, protection from loneliness, and good food 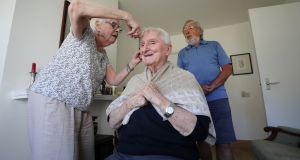 “It’s four minutes from my room to the [Dart] track and from there, with my travel pass, I can go anywhere in Ireland.”

Anthony Kenny (81) is sitting in the front room of Rosepark House, which is located just opposite Seapoint Dart Station, in south Dublin.

He’s been staying since July 2017 in the independent living centre. One of the reasons he likes it there is that he can come and go as he pleases. Also, it’s located in an area he has known all his life.

“I ran for election with the local council, unsuccessfully. I sailed in Dublin Bay.”

He is happy to be living where he is. “There is respect for the fact that you are active, and that you have a life you can lead from your own home.”

The house, and small bungalows out back, are very different from a nursing home complex. There are no restrictions on the residents’ movements.

“I like the fact that I can be very independent, yet, to use a phrase from sailing, people have a weather eye.”

The registered charity which operates the accommodation was set up almost 40 years ago and “caters for people who should not be in nursing homes”, says manager Aidan McNamara. The aim is to provide people with security, protection from loneliness, and “good food”.

The residents range in age from 64-93 and most have some sort of link to the area. One resident grew up in Blackrock, got married and lived in England, but moved into Rosepark after her husband died. “Her brother lives up the road.”

There are en suite rooms in the house, and small bungalows out the back. At the moment there are 12 residents, and the centre has a capacity for 14. There are 22 names on the waiting list.

Taoiseach Leo Varadkar has suggested in the wake of the Covid-19 outbreak that instead of building “lots of modern, new nursing homes”, new models of supported living could be developed.

At present, however, the charity behind Rosepark House receives “diddly squat” in terms of State support, other than a small subsidy towards the three-course lunch the residents sit down together to eat, every day.

The centre is run by volunteers, and there are six part-time staff, including staff who work at night.

McNamara says they would like to develop a unit to deal with residents who reach a stage where they require more care, so they wouldn’t have to move to an unconnected nursing home.

“The worse thing for older people is a massive change. Continuity is hugely important,” he says.

Local people are welcome to take part in some of the activities that take place at Rosepark. “We want to be linked to the wider community.”