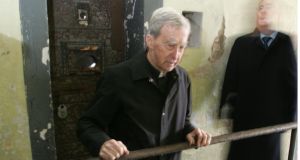 Fr Joseph Mallin in 2006 at his father’s cell on the 1916 landing in Kilmainham Gaol where he visited his father on the May 8th, 1916 , the day he was executed for his command of the Irish Citizens Army in the St Stephens Green area during the Easter Rising. Fr Malin was aged two at the time and remembers the visit. Photograph: Alan Betson

President Michael D Higgins is attending a memorial mass for Fr Joseph Mallin who was the last surviving child of one of the executed leaders of the Easter Rising.

Friends and family gathered at Saint Francis Xavier Church, Gardiner Street, Dublin on Saturday to remember Fr Mallin who died at the age of 104 on Easter Sunday.

Fr Mallin was aged two-and-a-half when his father Commandant Michael Mallin, second in command in the Citizen Army, was executed for his role in the Rising.

Fr Mallin spent most of his life as a Jesuit missionary priest in Hong Kong. His funeral mass was held last weekend at St Ignatius’ Chapel in Wah Yan College, Kowloon and was celebrated by Bishop Michael Leung and members of the Jesuit Community.

The funeral mass reflected Fr Mallin’s long service in the Far East with former students and friends filing past his coffin.

The background music was provided by Shelly Cox, a Hong Kong-based musician from Ireland who played traditional Irish tunes on the harp.

The memorial mass in Dublin is for friends and family who were not able to attend the funeral in Hong Kong because of the distances involved.

In his last year of life, Fr Mallin sought to vindicate his father’s reputation. The Rising trial transcripts, which were not published until 1999 suggests that Comdt Mallin sought to save his own life by suggesting that he had no commission in the Citizen Army and was acting under the orders of Constance Markievicz.

This would indicate that Mallin was trying to save his own skin and implicate Markievicz as his senior commander, hence putting her literally and figuratively in the firing line.

The suggestion that he would act in such a way is “profoundly wrong”, Fr Mallin wrote.

To the Memory of my Father is an 18-page document which states that the account as given by Brigadier General Ernest Maconchy, the president of the court martial, may have been motivated by personal malice towards Mallin.

Fr Mallin writes: “It is reasonable to believe that Maconchy would have regarded him as a treasonous former soldier, a disgrace to the British uniform and shooting alone would not be good enough.”