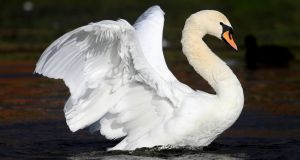 A swan preening itself on a lake near Kingfisher Farm Shop in Abinger Hammer, Surrey. File photograph: Adam Davy/PA

A case of avian flu has been detected in a swan in Co Derry.

The H5N8 strain of the virus was confirmed after tests on the dead bird found at Lough Beg.

Chief veterinary officer for Northern Ireland Robert Huey said the discovery was not a surprise, given recent cases in the Republic and Britain.

He urged owners of poultry businesses to step up biosecurity precautions to prevent the disease entering their flocks.

The risk to public health from the H5N8 strain of bird flu is classified as very low, with a very low food safety risk, but the virus would have a significant adverse impact on the industry if it was detected in commercial poultry operations.

Dr Huey said: “This detection in Northern Ireland is not surprising as there have been two recent confirmed cases of highly pathogenic avian influenza in poultry in Great Britain.

“There have also been three confirmed cases of H5N8 in wild birds across England and a falcon in Co Limerick has tested positive in recent days. In addition, the risk of an avian influenza incursion to the UK increases over the winter months from migrating wild birds.”

Dr Huey said the risk to poultry in Northern Ireland was “moderate”. He said biosecurity levels on individual sites was a crucial mitigation factor.

“Veterinary officials continue to monitor the situation across Great Britain and the Republic of Ireland and in consultation with stakeholders will determine the necessary next steps to mitigate for an avian influenza incursion in poultry here,” he said.

“I would re-emphasise the need for all keepers of poultry, including game birds and pet birds, to take action now and carefully consider and improve biosecurity to reduce the risk of transmission of disease to their flocks.

“If avian influenza were to enter our Northern Ireland flock, it would have a significant impact on our poultry industry, international trade and the wider economy. All keepers of birds should critically review and improve their biosecurity measures where necessary in order to keep their birds safe.” - PA