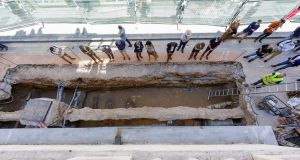 Site of the dig. Photograph: City of Valladolid

On many occasions Vincent O’Donnell, a retired primary school teacher from outside Donegal town, has led family members on a melancholy pilgrimage to the Spanish city of Valladolid, once the capital of Spain.

In 2011 a plaque was unveiled acknowledging that the city was the last resting place of the most famous of his ancestors Red Hugh O’Donnell. That ceremony acknowledged the connections between Ireland and Spain which once shared a common religion in Catholicism and a common ancestral enemy in England.

Red Hugh was in Spain to solicit the help of King Philip III in sending another Spanish army to Ireland – the first had been defeated at the Battle of Kinsale in 1601. Red Hugh died aged 29 in September 1602 from a fever and was buried with all the pomp and pageantry the Spanish crown could muster.

It was done, according to the Annals of the Four Masters, “with veneration and honour, and in the most solemn manner that any of the Gaels had been ever interred in before”.

Despite the status accorded to Red Hugh in death, his burial place was lost when the Chapel of Wonders, his last resting place, and the Franciscan monastery where it was located disappeared when the monastery was levelled in 1836.

Now, thanks to the diligence of Spanish archaeologists, the chapel has been found and they will enter it next week in the hope that the grave of Red Hugh will be rediscovered.

Red Hugh had no children, and the O’Donnell family did not prosper after his death. He was succeeded as clan leader by his brother Rory who, along with their sibling, Cathbharr was part of the Flight of the Earls in 1607. They fled with Hugh O’Neill to the continent and their flight marked the end of Gaelic Ireland.

A year later Rory and Cathbharr died within weeks of each other in Rome from fever. They had children, but their children had no children and so the family line died out. As a result, the Office of the Chief Herald, which adjudicates on old Gaelic titles, has determined that there is no “The O’Donnell” – or clan head.

If there was one though it would probably be Vincent O’Donnell (75) from the parish of Inver in Co Donegal. He shares a common ancestry through Manus O’Donnell, the 21st chief, who was Red Hugh’s grandfather.

Mr O’Donnell was the long-term secretary of the O’Donnell Clan Association, and the go-to man for all the ancestral family business. He only retired some months ago after being diagnosed with Motor Neurone Disease (MND).

“I’m the linchpin in the O’Donnell family, the big boss, the buck stopped with me and everybody accepted that way,” he declares.

He says the original O’Donnells were distinguished by the “bal dearg” or red spot between the shoulder blades which was regarded as a mark of greatness. Spanish archaeologists will eschew the bal dearg, however, for a simple DNA test if the remains are found.

There are branches of the family scattered across Europe. One branch were French counts. Another – probably the closest ancestors, according to Mr O’Donnell – made their fortune with the East India Company.

“They are very British and have no interest in Irish history,” he says regretfully.

One man who does take a keen interest is Francis Martin (Frank) O’Donnell who has penned a 750-page tome about the family history entitled The O’Donnells of Tyrconnell – A Hidden legacy.

He is a descendent of Red Hugh’s half-brother Domhnall O’Donnell who was later killed by Red Hugh’s mother Iníon Dubh following a family dispute.

Frank O’Donnell says the Spanish authorities should look no further than Don Hugo O’Donnell, a Spanish aristocrat and historian, for an ancestor if they are looking for DNA. A former diplomat for the United Nations, he believes Red Hugh’s body should be repatriated to Ireland with a State funeral and a burial in Donegal town.

“You have to remember that he had no intention of being permanently in Spain.”

He acknowledges that the city of Valladolid, which has gone to great expense and trouble to find Red Hugh’s remains, might have other ideas. As a compromise he cites the example of Frédéric Chopin, the composer, whose body is buried in Paris, but whose heart was repatriated to his native Poland.

Vincent O’Donnell says he would be “quite happy to leave him where he is for the last 400 years” provided there was a suitable monument or memorial to mark the spot.

As the excavation continues, the mayor of Valladolid Óscar Puente told The Irish Times that relatives of Red Hugh had already come forward offering DNA samples if needed.

However, he said it may be difficult to positively identify Red Hugh as eight skeletons had already been found.

“We will need a little luck,” he says. “We know now that he is there. We will have to dig a little bit more, but we have found the place and for us, that is an achievement.”

The third week of the dig next week will see a further exploration of the Chapel of Wonders.

“We believe that [this] week could be week we find Red Hugh O’Donnell,” he added, suggesting his coffin could have identifying marks because of his status.

What will happen if the discovery is made?

“If we find the remains, we have to do something that both countries find suitable,” Mr Puente. “We want to use this search to strengthen the bonds between Ireland and Spain. That is something we will have to discuss with the Irish Government. ”