Cancer, renal and other healthcare investments to be delayed 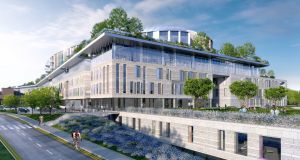 The development of new facilities for cancer patients in Galway, for those with kidney conditions in Tallaght Hospital and a new psychiatric unit in Sligo are set to be delayed as a result of funding pressures in the health service.

In addition, about half of the HSE’s planned programme for replacement of equipment and ambulances will not go ahead this year.

This could affect investment in diagnostic equipment such as new MRI, X-ray or ultrasound machines. Minister for Health Simon Harris has told Minister for Public Expenditure Paschal Donohoe that the capital plan for the health service is facing “a funding gap” of €109 million this year.

The capital budget was set at just under €500 million for this year.

However, Department of Health documents including correspondence between Mr Harris and Mr Donohoe, seen by The Irish Times, reveal that there is a €109 million hole in the capital budget for the health service this year.

Highly placed sources said this meant a number of projects would be slowed down or delayed by six months – effectively pushing them into the 2019 budget.

Sources said these projects included the planned new radiation oncology unit in Galway, the new acute psychiatric unit in Sligo and the new renal unit at Tallaght Hospital in Dublin.

In late May Mr Harris wrote to Mr Donohoe seeking to get the Government to deal with the capital funding pressures being faced by the health service this year.

Mr Harris said the Government’s 10-year capital plan, which will see the investment of €10.9 billion overall in health facilities and equipment, was “not balanced”.

He wanted the Government to bring forward nearly €1 billion in funding originally scheduled to be spent in the latter years of the plan.

He said the bulk of available capital funding in the next years would go to major projects such as the new National Children’s Hospital, the new National Forensic Mental Health Campus in north Dublin and the relocated National Maternity Hospital. He said this would leave “little or no scope to undertake the essential investment in diagnostic and medical equipment, to commence planning and design of future projects including bed capacity and other projects identified in the National Development Plan and in the Sláintecare Implementation Plan”.

Separately, internal calculations within the HSE suggest that the overall financial overrun for the health service this year could range from €750 million to €1.1 billion in a worst-case scenario.

Mr Donohoe told the Cabinet on Wednesday the HSE deficit could be about €600 million and he warned Ministers this could affect their spending proposals for the forthcoming budget.

The view now forming in the HSE suggests the financial position could be far more serious than that set out by Mr Donohoe this week.

The growing projected health service deficit is being attributed to spending pressures in hospitals and on medical card and other demand-led schemes, as well as efforts by health insurance companies to reduce the cost they have to pay in respect of subscribers treated in public hospitals.

The Government also has to decide how to deal with a €140 million deficit carried over by the HSE from 2017.