Gavin Duffy profile: Who is the presidential candidate? 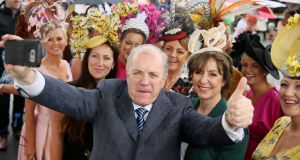 Gavin Duffy is mostly described as a businessman and entrepreneur but he is essentially a broadcaster at heart.

There is very little of his career that has not revolved around the airwaves or presentation: from his first foray into pirate radio; his RTÉ career; his time at the helm of the Louth-based local radio station LMFM; the media training company he founded with his wife: and of course, during his long stint on Dragons’ Den.

Much is made of the fact that Duffy (58) is one of three RTÉ “dragons” to throw their hat into the ring, with a view to making that Trumpean pivot from reality TV to reality politics.

While never a member of any political party, Duffy could be regarded as far more “political” in outlook than either Peter Casey or Sean Gallagher, although the latter once worked for Fianna Fáil politicians.

Duffy has been involved in high profile campaigns, and has done media training for politicians. He includes several taoisigh as former clients in his official profile and has done training for Fine Gael and also for Fianna Fáil.

Duffy has assembled a small and experienced team around him, including political publicist Richard Moore (who worked on Gallagher’s campaign in 2011)

He was also the moderator for the countrywide debates during the Fine Gael leadership contest between Leo Varadkar and Simon Coveney. For that reason, he has become to be regarded by some Fine Gael councillors and members as its party’s proxy candidate, although he is always at pain to stress his independence.

Duffy is from Drogheda where his parents owned a pub. By the time he finished school he was already involved in a local pirate radio station, and opted for it rather than a third level institute. That experience landed him a job in RTÉ where he worked as a reporter for several years, becoming the anchor for the broadcaster’s first marketing and business programme.

He made a decisive career change in 1989 when he headed the successful application for a local radio licence in Co Louth. What emerged was LMFM which was later sold to UTV for €10 million. In 1992, Duffy and his wife Orlaith Carmody, a journalist, set up a media communication company and, later they jointly set up HRM, a recruitment company. Carmody was a member of the RTÉ Authority between 2010 and 2015.

During this time Duffy kept his oar in broadcasting and was a familiar voice on LMFM. However, it was with the advent of Dragons’ Den that his national profile rose considerably. He is the only one of the original five dragons to have remained a stalwart on the programme through eight seasons. He has invested in some 40 start-ups through Dragons’ Den, the most successful of which have been self-tanning company, Tan Organics, hen party organisers, henparty.ie, as well as Aruna, a sauce and condiments company.

It is clear Duffy has amassed considerable wealth over 40 years. He, Carmody and their four children live in a period estate in Co Louth, where he indulges his interest in horse-riding.

He has drawn most controversy for his involvement in hunting. He is a former chairman of the Hunting Association of Ireland, has supported the Ward Union which does stag hunting and was very involved in RISE, the association which opposed the introduction of a ban on stag hunting.

With four nominations in the bag, Duffy can now begin planning for the campaign. He has assembled a small and experienced team around him, including political publicist Richard Moore (who worked on Gallagher’s campaign in 2011) and campaign director Kate Acheson, of the American Chamber of Commerce Ireland, who was also national youth officer for Fine Gael for five years.

Duffy has set out five themes for his presidential bid: youth; caring for older people; diversity and inclusion; respect; and encouraging more people to work together. In his presentations to local authorities, he has put a lot of emphasis on the soft powers of the President and how they can be used to influence, and to bring about positive societal change.