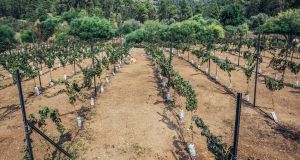 A vineyard in one of the disputed settlements. Minister for Foreign Affairs Simon Coveney has said the Government opposes Israeli settlements on Palestinian lands. File photograph: Getty Images

The State could face infringement proceedings by the EU or a third party if a Bill that would ban imports from Israeli settlements in occupied Palestinian territories is passed, the European Commission has warned.

A Government official privately sought the advice of the commission’s trade directorate last week on the proposed legislation, which is sponsored by Independent Senator Frances Black and passed its first vote in the Seanad in July with the support of Fianna Fáil, Sinn Féin, Labour and some Independents.

Fine Gael opposes the passage of the Control of Economic Activity (Occupied Territories) Bill 2018 on the basis of advice from the Attorney General that trade is an exclusive competence of the EU and under EU law Ireland cannot introduce a unilateral ban on goods imported from Israeli settlements.

Minister for Foreign Affairs Simon Coveney has said the Government opposes Israeli settlements on Palestinian lands. But he also said that international trade fell under the common commercial policy of the EU and that legally no member state has taken action on a national basis on such an issue.

Echoing the advice of the Attorney General, an EU commission trade official told a Department of Business official last week that enacting the Bill “would be in contravention of the EU’s competence on trade matters” under a treaty that covers common commercial policy for member states.

On the margins of last week’s meeting of the EU’s trade policy committee in Brussels, the Irish official raised the possibility of the proposed legislation being legal under a “public policy” exemption clause – as campaigners have argued – but the commission official shot down this option too.

The EU official advised that they had “considered that and their legal department was clear that that exemption was quite limited as determined by CJEU [Court of Justice of the European Union] law.”

“In essence, their views seemed to me to mirror almost exactly those of the Attorney General in his opinion earlier in the year,” the Department of Business official told colleagues in an email last Monday.

“DG Trade made it clear that they considered the legislation as leaving Ireland open to infringement proceedings, either by the commission or a third party.”

The EU had, until now, remained silent on the proposed legislation as it was debated and voted on in the Oireachtas. The commission said during the summer that it was watching developments regarding the Bill.

The support of the Independent Alliance, Fine Gael’s partner in Government, complicates the party’s opposition to the Bill, particularly if it goes to a free vote should the Bill reach the Dáil this autumn.

Separately, the State is supporting a case argued by France at the European Court of Justice supporting the labelling of food products originating from the Israeli settlements in the West Bank or Golan Heights.

Though it does not go as far as the Bill, Irish officials view the action – brought by an Israeli winery and funded by a US-based think tank that files cases against what it considers anti-Israel actions around the world – as a legal way of flagging to consumers products that originate from the Israeli settlements.

The State is supporting France in the landmark case arguing that products should be labelled as coming from the Israeli settlements “given the imperative not to mislead consumers about the origin of their food, and the EU’s broader commitments to uphold and have regard to the requirements of international law”.

The Bill has raised tensions between Ireland and Israel; Israeli defence minister Avigdor Lieberman called on the country to close its embassy in Dublin in the wake of the Seanad voting for the Bill.

The Government opposes the Israeli settlements, which are illegal under international law. Israel disputes this. Israel captured the West Bank and East Jerusalem in the 1967 war and has since built settlements there.

Both sides in the Israeli-Palestinian conflict each claim the territory as legitimately belonging to them.

Man who killed Jastine Valdez shrugged before being shot by gardaí, inquest told

Greens on the beach: More David Attenborough than Reggie Perrin

FG and FF back transition payment for those retired before qualifying for State pension 21:28
Scientist says methane from farming should be treated differently to CO2 21:03
Irish Times poll: Large majority want change of government 21:00
Nearly 2,000 more students register to vote, says USI 20:38
Councillors back plan for Magdalene laundry to be third-level college 20:23
SUBSCRIBER ONLY

Greens on the beach: More David Attenborough than Reggie Perrin