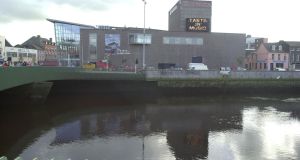 Opponents of the €140 million Office of Public Works (OPW) flood relief scheme for Cork are mistaken in their belief that a Cork Harbour tidal barrier will prevent flooding in the city, a senior OPW engineer has argued.

A tidal barrier would be extremely costly, says Ezra MacManamon, and would not stop flooding caused by the river Lee, which is is to be be tackled by OPW plans to put up riverside barriers .

Campaign group Save Cork City spokesman John Hegarty said they believed that a tidal barrier could be built at Little Island for less than the €300-€400 million figure cited for the OPW’s planned works in the city.

Citing the case of Venice, he said: “The Venetians looked at all the flood barriers in northern Europe, the Haringvliet Sluices, the Thames Barrier, and when they got back, they used just one word to describe them ‘Ugly – nothing ugly’.”

However, the Venetians’ complex flood defence system has taken 50 years to develop and will cost over €5 billion, says MacManamon, adding that a Cork Harbour tidal barrier would pose major difficulties.

The idea had been examined during work on the Lee Catchment Flood Risk Assessment and Management Study between 2006 and 2008, when it was estimated to cost €300-€400 million. Costs have risen since.

“There are a few locations you could put a tidal barrier – you could put one by the Jack Lynch Tunnel where the channel would be perhaps 500m wide,” said the MacManamon “But the difficulty there is you have very little space upstream then to hold water coming down the river when the barrier has to be closed.”

A barrier could be built on the 1km-wide stretch across from Passage West to Little Island: “[But] you would be building it on very permeable ground conditions with a lot of gravel – there’s a technical challenge with that.”

In addition, there is a danger that flooding could could “actually go around” Little Island: “We don’t want to be building a flood barrier where, in a climate-change situation, the flood is going around the barrier.”

Third, a barrier could be built between Cobh and Monkstown, but that would require a second at the back of Great Island at Marlogue: “They might both be 300-400m [wide], but we think that could cost €500 million to €1 billion.”

Given that Cork Harbour enjoys EU Natura 2000 special area of conservation designation, “a strong case would have to be made to the EU that there was no other alternative” available, he said.