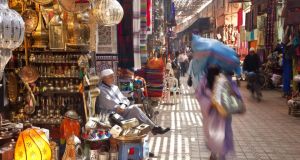 A souk in Marrakech. Morocco has not seen the kind of political upheaval that the Arab Spring sparked in its north African neighbours. Photograph: Getty Images 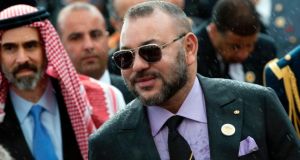 Morocco’s king Mohammed VI, whom many credit with controlling the extremist threat that has blighted other countries in north Africa and the Middle East. Photograph: Fadel Senna/AFP/Getty Images

A 20-minute drive south out of central Rabat, the Mohammed VI Institute is a large complex of plush, cream-coloured buildings, sitting behind a fence. Although the luxurious premises resemble a private university, they are in fact a pillar of Moroccan religious diplomacy.

The institute was opened in 2015 by the king and it is a training centre for young Islamic preachers, housing 1,200 live-in students from Morocco, sub-Saharan Africa and France. The institute’s international reach reflects its status as a major tool in Morocco’s efforts to encourage a moderate strain of Islam, not just domestically but beyond its borders.

“It’s a good school, a very good school,” Musa Sano, a 23-year-old student from Guinea, says as he leaves the institute through the front gate. “It’s good for Morocco. It’s good for Africa.”

This is part of a wide-ranging strategy by Morocco and its king to counter extremism through an array of “soft” initiatives. These have included establishing a radio station, Radio Coran, which broadcasts prayers throughout the day, and even the 2015 pardoning of 37 apparently repentant Salafists serving prison sentences for terrorism-related offences.

Dismissed by some as superficial, and by others as political distractions, these efforts nonetheless reflect Morocco’s determination not to fall into the kind of religion-fuelled turmoil that gripped Egypt in the wake of the Arab Spring, or which saw neighbouring Algeria riven by civil conflict.

The regime’s concerns about extremism were prompted, in great part, by a 2003 terrorist attack in Casablanca, which killed 45 people, followed by another in Marrakech in 2011, which killed 17.

In January, the CIA warned that Morocco was one of several countries at risk of suffering a terror attack of the kind seen in Nice, Berlin and the UK recently. But another worry for Moroccan authorities are the nationals who go abroad to commit such attacks. A Belgian man of Moroccan origin, Gelel Attar, was charged with plotting the 2015 Paris attack, while Spanish authorities frequently arrest Moroccans on terrorism charges – most recently three men accused of recruiting for Islamic State in Catalonia and Valencia.

A Moroccan national investigation bureau, set up in 2015, has made about 600 arrests and dismantled about 40 cells, according to the government. But it is Morocco’s 53-year-old king, bearer of the title “Commander of the Faithful”, whom many credit with controlling the extremist threat.

In a televised speech last summer, Mohammed VI’s condemnation of terrorists could not have been clearer, when he said: “They are people who have been misguided and they are destined to live in hell forever.”

Mohamed Daadaoui, an expert on the politics and monarchy of Morocco at Oklahoma City University, says: “Morocco has long been successful at countering the rise of extremism through advancing a version of Moroccan royal Islam that has the monarch at the helm.”

The regime’s virtual monopoly of the religious sphere, Daadaoui adds, “has inoculated the institution of the monarchy against challenges from extremism”, a strategy that is bolstered by the king’s claim of ancestral descent from the family of the prophet Mohammed.

Abdelali Hamiddine, a senior figure in the Islamist Justice and Development Party (PJD), which has governed since 2011, is confident that Moroccans’ allegiance to their king as their religious leader helps keep fundamentalism at bay.

“Terrorist organisations like Islamic State have no future in Morocco, except some young people who are influenced by some texts on the internet or on Facebook,” he tells The Irish Times.

He also points to social conditions in Morocco, which he says “are far better than in Egypt or Algeria”.

Morocco has not seen the kind of political upheaval that the Arab Spring of 2011 sparked in neighbouring north African countries. Instead, it has been relatively stable, with King Mohammed overseeing a parliamentary system which was merely tweaked in the wake of the unrest. Yet some suspect the king’s campaign of Islamic moderation is simply a crafty way of burnishing his international image while ramping up vigilance and repression of dissidents.

Maati Monjib, a political historian and human rights campaigner, says the king and his regime “are exaggerating the menace of Islamism in Morocco in order to take back the rights that were recognised and respected during the Arab Spring in 2011 and 2012”.

Earlier this year, reports emerged that the Moroccan regime had banned the sale of the burka in many towns and cities. However, the garment is easy to make at home, inviting the conclusion that the prohibition was an empty gesture.

“Extremism is gaining ground,” says Mohamed Elboukili, an academic and member of the Moroccan Association for Human Rights (AMDH). He believes the problem is being sown among younger generations who are under the influence of an increasingly illiberal education system.

He offers the example of the Muslim headscarf, which he says most of his female students now wear, in contrast to 15 years ago when few of them did.

“You can say to me this scarf doesn’t mean anything. Yes, it doesn’t mean anything, but it’s isolating the girl from the boy,” he says. “Now she’s wearing the scarf, but later on she’s not going to shake hands with the boy . . . Later on she’s not going to study in the same class with boys. Those are the mechanisms of an Islamist state, that’s how it works.”

Elboukili points to high illiteracy levels in Morocco, which he says are a typical trampoline for fundamentalists. He also highlights the role of the supposedly moderate Islamist PJD, which has governed since 2011.

The PJD’s collaboration with Mohammed VI is set to continue as the party attempts to form a new government following last October’s inconclusive elections. Meanwhile, only time will tell if the regime’s pre-emptive strategy against extremism is working or if fears of a nascent Islamist state are justified.