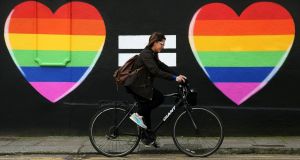 Glen, which was involved in the campaign for same-sex marriage ahead of the 2015 referendum, faces an investigation into its finances.

An official investigation has begun into whether the Gay and Lesbian Equality Network (Glen) breached rules on political campaigning and financial management.

The charity has also appointed an external investigator to examine allegations of bullying made by staff.

The Charities Regulator has told Glen to provide it with financial records, details of credit cards and the report of an independent auditor by the end of this month.

“This arises from a request to the regulator for guidance following an internal review. The request was made on the instructions of the board, which is fully cooperating with the regulator,” Glen said in a statement. “The process is ongoing and we will work with the regulator to implement any recommended changes in our procedures.”

One of the issues being examined by the regulator concerns the use of the charity’s resources to support political campaigning, The Irish Times understands.

Glen’s co-chairman, Kieran Rose, has stepped down from this role after it emerged campaign literature for his Seanad election campaign last year was printed at the charity. While the cost of the printing had been reimbursed, the organisation sought clarification from the regulator in case it has breached rules limiting the involvement of charities in political campaigning.

Minister for Social Protection Leo Varadkar on Saturday stressed the “really important work” done by Glen but said it was very important any issues were fully investigated and that “anything that needs to be put right is put right”.

The intervention by the regulator follows a disclosure made by Glen in response to concerns raised by the executive director, Áine Duggan.

Ms Duggan, who was appointed last October, raised a number of issues with the board after carrying out a due diligence of the organisation, which works on issues such as sexual health, mental health and education in the LGBT community.

Among these issues were alleged poor corporate governance, a lack of internal controls and proper separation of duties. It is understood that Glen credit cards may have been used for private purchases, with the money being reimbursed later.

Ms Duggan, who is still in her probation period, tendered her resignation several weeks ago and is due to leave the organisation this week.

The HSE, which funds Glen’s mental health programme, was due to provide €200,000 in funding last month, but this is being withheld pending the investigations by the charities regulator.

The board of the charity has directed its accountants to review financial transactions and new auditors are being appointed.

Two staff have gone on sick leave in recent months, and one of these has resigned, prompting the appointment by the board of an external investigator to look into complaints of alleged bullying. Another two staff were made redundant as the financial positions of the charity worsened, and two more positions have been left unfilled after staff left.

Glen said its board and staff had always been mindful of their statutory obligations. “The board is satisfied that all grants received have been used for the intended purpose and has no reason to suspect there has been any misappropriation of funds.”

“Notwithstanding the result of the marriage equality referendum and progressive social change in recent years there is still a need for a well-resourced, ambitious national organisation and our focus in the coming months will be the ongoing development of Glen.”