Buses and trains for essential travel only, says transport authority 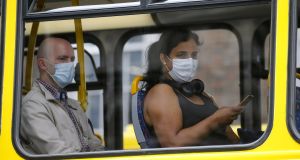 The National Transport Authority warned that the capacity problem could deteriorate when schools return on Monday. File photograph: The Irish Times

Public transport should be used only for essential journeys and customers should avoid putting pressure on space in socially distanced seating in buses and trains.

That is according to the National Transport Authority (NTA) which said on Sunday that social distancing policy was coming under pressure on some services, particularly at peak times.

Reduced capacity levels are in place on most services in line with the Government’s Level 5 restrictions which cut capacity to 25 of each vehicle .

The NTA said people have been left behind at bus stops and the problem is most acute early in the morning, in the Dublin region.

NTA chief executive Anne Graham warned the situation could deteriorate when schools return on Monday. She said the return of school children to public transport was “likely to give rise to additional pressure. We are anxious to make sure that customers are aware of the situation. People who can work from home should work from home.”

Transport unions have expressed concern that public transport staff would be expected to police the social distancing restrictions.

The authority was asked by The Irish Times to comment on whether anything has been done to protect staff from abusive customers, and a response is expected.