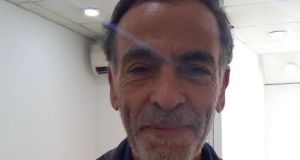 Tahir El Shirif (68), a Libyan national, fears he may never see his Irish children again unless he can at least get an emergency travel document to return from Tripoli

An Irish citizen in failing health says he is stranded in Libya as he has been unable to renew his Irish passport.

Tahir El Shirif (68), a Libyan national, fears he may never see his Irish children again unless he can at least get an emergency travel document to return from Tripoli.

Mr El Shirif came to Ireland in the 1970s as a student to study engineering at the then Kevin Street College of Technology. He met and married an Irishwoman and ran a service-repair business in Tallaght. He was naturalised as an Irish citizen in 1988.

Following separation from his wife, he returned to Libya during the Arab Spring protests in 2011. He has adult children living in Dublin.

Speaking by phone from Tripoli, he said he decided in 2018 he to return to Ireland due to the deteriorating security situation and his worsening health. A long civil war has led to the near breakdown of society. Libya is on the “do not travel” list of countries kept by the Department of Foreign Affairs.

“I also have an ulcer that has gone very bad, very bad with the stress. I nearly to didn’t make it a few months ago, to be honest.”

His Irish passport, a photograph of which has been seen by The Irish Times, was issued by the Dublin Passport Office on February 14th, 2002, and expired 10 years later.

According the rules on the “Passport Online” website, renewal of a passport issued more than 15 years ago is considered a “first-time” application. Only citizens resident in Ireland, Northern Ireland, Britain, the European Union, the European Economic Area or Switzerland can apply for the first time online.

“If you are a citizen resident outside of these countries, please submit a paper application through your nearest Irish embassy or consulate,” it says.

There is no Irish embassy or consulate in Tripoli. Given the ongoing war, Mr El Shirif says he could not entrust his documents to a courier or postal service. So, he travelled in person to the Irish embassies in Kuala Lumpur, Malaysia, in October 2019, and Cairo, Egypt, in March 2019 as well as the Irish honorary consul in Istanbul, Turkey, in November 2018.

His passport shows country entry- and exit-stamps for these countries.

“I went up and down to Cairo on the train. I really thought the Irish embassy there would help be but they did not give any result. The only reason they gave was that my passport was too old. I really feel they neglected me, as if I was not worth a penny to them.

“I have even gone to the Italian embassy, the only European embassy in Tripoli, but they said they could not help me.”

He is “desperate” now to return to Ireland but cannot enter the country without his Irish passport. He is not eligible for a visa on his Libyan passport.

“I am trapped. Here, is not safe for an old man in bad health. I want to see my children again, to tell them I love them before I die.”

His daughter, who did not want to be named, said she had made several efforts to help him. “I obviously can’t go to him. It’s too dangerous. I just can’t understand what the problem is. I don’t want my dad stranded there, not well.”

A spokeswoman for the Department of Foreign Affairs said it could not comment on an individual case.