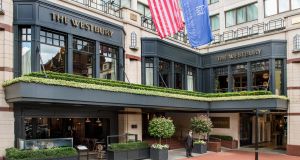 The Westbury in Dublin, part of the Irish-owned Doyle Collection hotels group

It could be the fourth quarter of 2022 before there is a “substantive recovery” in business for the Irish-owned Doyle Collection hotel group, its chief executive Pat King has said.

The Doyle Collection operates a portfolio of eight hotels in Ireland, Britain and the US, including the five-star Westbury in Dublin. All the hotels closed in March due to the introduction of Covid-19 restrictions in each jurisdiction, with trading “significantly impacted” as a result.

“It is envisaged that trading will recover in a graduated manner,” Mr King said. “In the UK and Ireland it will be initially be domestic and short-haul led. As and when Europe begins to reopen, London and Dublin will benefit. Washington DC, as the centre of federal government in the US, will benefit from the rebuild of domestic and international business.

“Long haul international will take longer to benefit the UK and Ireland. Major events such as conventions, sporting and cultural occasions will remain restricted in terms of capacity, and will be the last to appreciably recover in terms of hospitality demand.

“It could take until quarter four of 2022, at least, for a substantive recovery across the locations, and of course this is depending on the improvement in public health considerations.”

Mr King said the hotels had availed of government supports in each of its jurisdictions. “The UK government was particularly decisive in moving business rates to zero for 12 months,” he said.

The Westbury reopened on July 22nd with a reduced bedroom capacity to ensure that all public health measures could be managed. “Up to the introduction of Level 5 restrictions occupancy levels for this reduced capacity held up well, particularly for weekends,” Mr King said.

Accounts just filed for Doyle Hotels (Holdings) Ltd show that it made a pre-tax profit of €8.4 million on turnover of €148.3 million for 2019.

The value of its hotel assets increased by €23.4 million on the previous year to €671.5 million. Doyle Hotels had €35 million in cash at the end of last year, and refinanced its €241 million in loan facilities out to 2029.

Turnover in Ireland – where it operates the Westbury, the Croke Park hotel and the River Lee in Cork – was flat at €57.5 million.

Income in the UK rose by 2.7 per cent to €70.9 million, while turnover at the Dupont Circle in Washington DC was flat at just under €20 million.

The Doyle Collection is owned by members of the Doyle and Beatty families and traces its roots back to a company founded by well-known Irish hotelier PV Doyle.