BusConnects: Over €55m spent by NTA on bus scheme so far

Transport authority needs to explain exactly how the money was spent, says TD 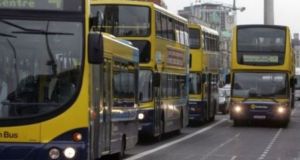 However, there are calls for the NTA to explain precisely the breakdown of costs involved in different parts of the project.

The NTA has incurred expenditure of €55.2 million on the scheme which aims to redesign bus services in the capital, with an ultimate total price tag of €2 billion, according to figures released to Fianna Fáil TD John Lahart.

The NTA said the expenditure was spread across the three main components of the scheme – including the redesign of the networks, the design of “core bus corridors” and the “next generation” ticketing project.

The spend so far has covered a range of engineering and design works across the BusConnects project, as well as site investigations, environmental and other surveys, development of transport models and transport analysis work, and a team to examine property acquisitions that will be needed along the 16 corridors anticipated across the project.

The money also covers design and legal teams working on the ticketing project, which aims to reduce the amount of time buses spend waiting at busy bus stops as people pay getting on. It has also paid for a “business case team”, and communications and legal support services for various public consultation programmes that have been run as part of the wider project, the NTA said. However, the NTA did not provide figures on the precise costs associated with each individual element.

While Mr Lahart said he was supportive of BusConnects, he said costs should be more clearly broken down for the different aspects of the project. “They haven’t broken down the costs into the different sections so we don’t know how much the route changes cost, for example,” he said.

The Dublin South West TD was critical of elements of the plan, including a cycle track in Rathfarnham village which he said would necessitate the construction of three bridges and which would “bring the user in a particularly counterintuitive offroad direction”.

“There are what appear to me to be extravagant elements which are unnecessary and overengineered,” he said, adding that the online consultation for the project had “not been satisfactory”.

“You can’t help but come away from time to time with the feeling that these routes have been desktop designed without a field trip,” he said.

A spokesman for the authority said the public consultations had been “extensive”, as they were seen as a vital element of the project “to ensure that the final network design should incorporate as much feedback as possible”.

Final plans for the creation of 16 continuous bus corridors and segregated cycle lanes across the city were published last November, with a consultation period running until the middle of December. They cover some 230km of priority lanes, which would require the felling of more than 3,000 trees and the acquisition of part of 726 front gardens. An application for this element to An Bord Pleanála is expected this year.

Mr Lahart also suggested that the project team was “completely underestimating” the potential size of household compensation costs associated with the project, “which could balloon”. Mr Lahart also called for an increased focus on the ticketing project, which he said “ought to be the priority from a health and safety point of view with Covid”.