Services between Dublin and Cork, Belfast, Limerick and Galway will come to an end 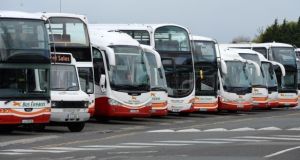 Like many public transport companies Bus Éireann has struggled due to the huge impact of the pandemic on passenger demand and revenues. Photograph: Dara Mac Dónaill

Bus Éireann is to close down several of its inter-city Expressway routes as a result of financial pressures brought about by the Covid-19 pandemic.

An express service running from Galway to Limerick via Shannon airport, which ceased to operate during the summer is not now to resume.

However, it is understood the company does not plan any job losses as a a result of the route closures.

Instead, it is understood Bus Éireann is planning an expansion of its operations in Cork, Galway, Limerick and Waterford where it offers city services.

Bus Éireann said on Monday that it was closing and suspending the inter-urban routes “in response to significant medium-term challenges posed by Covid-19 in order to safeguard Expressway’s remaining 14 national routes and meet demand required on other city and commuter services”.

It said no dates had been determined yet as to when the services earmarked for closure would stop operating but that “changes are likely early next year when the current commercial bus operator emergency supports to the Cork, Limerick and Galway routes expire”.

“The X51 service from Galway to Limerick and the X1 service Dublin to Belfast have not been in receipt of emergency funding and services will formally cease on these routes over the next few months. The National Transport Authority (NTA) is responsible for transport connectivity and will review requirements along these routes to mitigate any impact.”

The board of Bus Éireann approved the moves at a meeting on Monday.

The company said that the decision to close and suspend the routes followed “considerable analysis and review over the past number of months”.

Bus Éireann chief executive Stephen Kent said: “We have an opportunity through the July stimulus measures for public transport to increase our Bus Éireann city services in Cork, Galway and Limerick, as well other services in Louth and Meath under contract to the NTA.

“This expansion will require more than 100 drivers which we can fully deliver by consolidating our Expressway network and taking a decision to withdraw from a small number of Expressway routes which would otherwise incur unsustainable losses and thereby avoid job losses in a very difficult trading environment.”

The company’s chief commercial officer Eleanor Farrell said it would “communicate any changes clearly with our customers and will work closely with the National Transport Authority on timing.

“A more sustainable footing allows us to make important investments into our overall network and these decisions will allow us to continue improving our customer experience, providing a platform for future growth, despite current Covid-19 challenges”.

The National Bus and Rail Union (NBRU) urged the Government and opposition TDs to support the retention of Bus Éireann services.

NBRU general secretary Dermot O’Leary said the union would “move might and main to ensure that our members jobs are protected.

“However, our ability to directly influence the retention of vital transport links into the towns and villages affected by this decision, will require community support and political intervention.”

The union said it had warned for several years about the threat to bus routes serving local communities. It said it had suggested that the provision of additional licences by the National Transport Authority to private operators would lead to “market saturation”.

It also said it had argued that this practice would “lead to the demise of those off-motorway bus services that serve the intermediate towns and villages” that were not served by the private operators which were running point-to-point routes.

Mr O’Leary said: “The politicians, particularly those that represent the constituencies which will be impacted by this decision to cull routes, should ponder on the fact that Bus Éireann, and Bus Éireann alone, in the vast majority of areas across Ireland, was the only bus service left standing during the Covid-19 induced lockdown, from March through to July. Without such services, large parts of Ireland would have been cut off from essential work, doctors’ surgeries, pharmacies and retail. It is also noteworthy that the return of other operators to the so-called inter-urban market was preceded by an intervention from Government to effectively subsidise all bus operators on those heretofore commercial- only routes.”