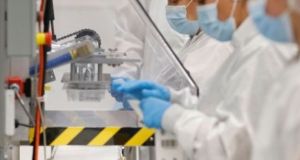 Infectious diseases consultant Professor Sam McConkey warned, however, that a test being used ‘here and there’ is no guarantee ‘that it actually works well’. Photograph: iStock

A pilot project for a new Covid-19 test that provides results in 15 minutes is underway in Co Roscommon.

The test involves a nasal swab with a blood test for antibodies.

Robert Quirke, chief executive of the ROQU group involved in the testing said it was being used at Frankfurt, Rome and Dusseldorf airports “and is being rolled by Lufthansa. They’ve already performed a number of tests at the airport which has enabled people to fly.”

Speaking on RTÉ’s Brendan O’Connor show he said “the test has been validated at 97 per cent accuracy” and was being used in 60 countries.

The HSE has not financially invested in the project but is involved in the monitoring and supervising of the project in Co Roscommon said Mr Quirke, whose company works with national governments on economic and social development projects.

Infectious diseases consultant Prof Sam McConkey warned, however, that a test being used “here and there” is no guarantee “that it actually works well.

“We’ve used bloodletting and leeches and lots of dodgy things through the years and that doesn’t mean they work well.”

He said, however, that similar antigen testing was done in a village in northern Italy near Bergamo several months ago “and having that understanding of how in local areas it transmits in really thorough detail is very useful”.

Prof McConkey added that “this approach could be really good at showing what areas are Covid-free and letting people in those areas be much more normal. Unfortunately you’d be restricting travel in and out of those areas because you don’t want it re-introduced.”

He said that for screening tests like this high sensitivity was needed. Currently a test costs €25 and if five million people were tested it would cost €600 million.

Mr Quirke said the test would be available for less than €20. He said any solution had to be affordable, efficient and available. His company was directing supplies of rapid antigen testing from the manufacturer and had connected HSE to the producer, he said.

In the Dáil this week Independent TD Matt Shanahan said he could not understand why the authorities were not looking at the possibility of using short turnaround tests such as antigen testing which provided a result within 20 minutes.

Mr Quirke said that “a lot of the time we sit back and ask Government to provide a solution”.

“The reality in cases of emergency is the solution comes from innovation, from industry and from academia and this is another example of this,” he said.