Chairman of company delivering project says quarantine can cause difficulties 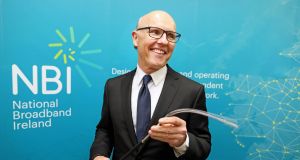 David McCourt: he said the broadband plan could be delivered within five years unless Covid has an unforeseen impact. Photograph: Julien Behal

The National Broadband Plan can be delivered within five years “if Covid-19 doesn’t wreak havoc”, the chairman of the company charged with delivering the project has said.

Mr McCourt, an Irish-American telecoms entrepreneur, said on Friday that a contractor working on the project had contracted the disease, which had had a knock-on impact on colleagues. “[It is] not a statistical big deal for a project with 1,200 people. However, everyone that person came in contact with has to now quarantine for two weeks. If that repeats itself it makes things difficult.”

Mr McCourt was delivering an address as part of the 2020 Valentia Lecture organised by the Valentia Transatlantic Cable Foundation, an advocacy group which is lobbying for the inclusion of Valentia Island as a site on the Unesco World Heritage list. The first transatlantic telegraph cable was laid between the island and Canada in the 1850s.

The NBI chairman said the national broadband plan was originally a 10-year project, then became a seven-year project, and currently work is under way to do it in five years “which is very, very doable if Covid-19 doesn’t wreak havoc”.

He said he hoped that treatments and vaccines for coronavirus could improve the situation.

“I think…by spring time there’ll be enough things known about Covid and probably some vaccines somewhere that sort of slow down the spread, so I think we’ll be able to manage through that,” he said.

“Assuming that Covid doesn’t get any worse and cause any more problems, it should, it hopefully will be, everyone’s working to make it be, less than the scheduled time that we have allotted for it.”

The Government has already indicated its preference that the National Broadband Plan be fast-tracked. Minister for Communications Eamon Ryan told the Dáil this week that his department was engaged with NBI “to explore the feasibility of accelerating aspects of the planned roll-out”.

This engagement came after it emerged that the pandemic had led to delays in the project caused by contractors from Britain being unable to travel here.