Protest outside US Embassy in Dublin over gun control 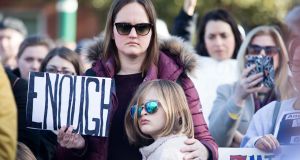 Mother and daughter Emily and Claire Lantz pictured at a rally for the reform of American gun laws in Dublin. Photograph: Tom Honan

Demonstrators protested outside the American Embassy in Dublin on Saturday in support of the anti-gun rallies taking place across the US.

The March for Our Lives event which takes place in Washington today has been organised by survivors of the Marjory Stoneman Douglas High School massacre in Parkland, Florida last month, which left 17 people dead when a former student entered the school and opened fire.

Similar demonstrations are being held across the US and further afield, with up to 800 events scheduled worldwide, according to organisers.

Around 150 people gathered across the road from the US embassy in Ballsbridge, south Dublin, chanting “enough is enough”.

The crowd, which consisted of a number of Americans living in Ireland and young families, held a moment of silence for victims of gun violence.

Mary Farley, one of the organisers of the event, moved to Ireland seven months ago with her husband and two children.

“It’s really important to show the United States that the world is watching. We are going to put global pressure on this issue, not just national pressure.

“The kids that are here don’t have to endure the intruder drills and lockdown drills that American children do. To see my children going to school here and see them feeling safe is so wonderful. We really want that for American children, to feel safe in school.”

Among the protesters was Lily Horn (23) from Connecticut, who has been living in Dublin for the last six months.

“It’s really easy to be detached from home while you’re here but I think this is a great way for everybody to come together and focus on the problems at home. I’m hoping movements like this will finally create change.

“When I was in school we had lockdown drills, where you teach kids to hide under a desk if there’s an armed shooter in your school. It’s so interesting talking to young people here because that is not something they can relate to.”

John Lawlor (67) from Balinteer said: “I just think gun law in the States is crazy”.

“I think people need to show that it’s just not acceptable. It’s the only country that has this kind of mentality. I wanted to show solidarity.

“I don’t know how it’s going to be changed but I think even a small demonstration like this, just to show that this is not the norm and we’re not going to normalise it.”

Christine Lacey (65), originally from San Francisco has lived in Ireland for much of the last 20 years.

“What’s happening in the US at the moment is a little overwhelming and scary. It’s great living in Ireland but I think it’s great to support what’s going on over there and help any way that we can.

“The fact that we’re presenting a united front all over the world, should hopefully carry some weight.

“I taught in the States and we used to do those lockdown practices, now one of the solutions being put forward is to give teachers a gun. Putting a gun anywhere near a classroom is just absolutely abhorrent to me.”