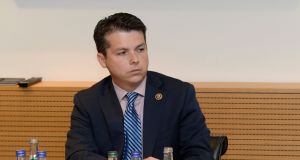 Noting that the Belfast Agreement had been held up as the “unquestioned gold standard” in terms of peace agreements, Congressman Brendan Boyle criticised recent suggestions by some British MPs that it had run its course. Photograph: Eric Luke

Britain’s departure from the European Union could unravel the Belfast Agreement, a US congressional committee has been warned.

Speaking at a special hearing of the Helsinki Commission – a US government agency which promotes human rights – Brian Gormally of the Belfast-based Committee on the Administration of Justice (CAJ) said, while it was unlikely that any one particular effect of Britain’s exit would destroy the peace settlement, “the cumulative impact could begin to unravel it”.

He said Brexit would have “a profound effect on the legal and constitutional underpinning of the present jurisdiction of Northern Ireland, its relations with the Irish State and UK-Ireland bilateral relations”.

His comments came as the British government prepared to bring a group of US Congressional staff members to Northern Ireland this weekend. The visit forms part of a broader visit to Britain designed to highlight the various issues around Brexit and preparations under way as the country prepares to leave the EU. Politicians from both the Democratic and Republican parties attended Thursday’s hearing on Capitol Hill which was chaired by Representative Chris Smith.

Noting that the Belfast Agreement had been held up as the “unquestioned gold standard” in terms of peace agreements, Congressman Brendan Boyle criticised recent suggestions by some British MPs that it had run its course.

“Some in London have made comments about the Good Friday Agreement to the effect of that this doesn’t need to last, it wasn’t meant to be set up forever. This is a very disturbing backsliding the likes of which we have not heard for the previous 19 years,” the Democrat said. “Former prime minister John Major was right when he spoke out against such dangerous rhetoric.”

He said there was “zero support” in Washington DC to returning to the days before the agreement, noting that while it was not perfect, it was important to stress its achievements.

Committee chair Chris Smith, a long-standing Republican Representative from New Jersey, said that while the peace process represented “the best of the Helsinki principles, using democratic processes for the peaceful resolution of a conflict” there are still problems 20 year later.

He said reconciliation had in some ways stalled, noting the case of the murder of Pat Finucane. He also criticised recommendations by a Westminster committee last year that a statute of limitations should apply to British soldiers for crimes committed during the Troubles, calling it “a dangerous backtracking on the part of the British government”.

Mark Thompson of Relatives for Justice told the committee nationalist confidence in policing is now “at an all-time low”. He highlighted a ruling earlier this month in Belfast which found that DUP leader Arlene Foster had unlawfully blocked attempts to secure funding for legacy inquests into 55 cases, involving 97 killings. He said that accountability was being thwarted when it came to British state involvement in murders.

Judge James McKay III, the head of the Ancient Order of Hibernians, one of the oldest Irish-American groups in the US, called on the Trump government to appoint a Northern Ireland envoy.

He argued that a partial outsider could chair discussions on the contentious issue of Irish language in the North.

“If something as benign as the promotion of the Irish language cannot be resolved, then what hope is there to address more contentious issues,” he said.