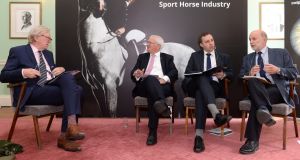 Britain’s exit from the European Union poses a “formidable” challenge to the equine industry and could potentially result in multiple border checkpoints for the thousands of horses entering Ireland every year from the UK, according to experts.

Ahead of the opening of the Dublin Horse Show on Wednesday, a forum heard that Brexit might effectively mean Britain being treated as a “third country” with respect to the movement of animals, including racehorses.

Speaking at the event at the RDS, John Melville, superintending veterinary inspector at the Department of Agriculture, noted the EU directive governing such movements did not make any reference to “third countries”.

“Therein lies an immediate problem. We would have to have an amendment to the directive with the agreement of all the other member states that would allow for some kind of equivalent to a tripartite agreement to exist with a ‘third country’, should the UK go all the way,” he said.

Currently, the rules for most EU member states require that horses travel with an inter-community health certificate and also that there is an electronic notification of the movement of the animal from one country to another. But a tripartite agreement between Ireland, France and the UK means the countries can operate a simpler, alternative system which doesn’t require the generation of a health certificate prior to moving an animal.

Mr Melville said that at present, horses entering any EU member state had to enter through a border inspection post. Between 10 and 20 horses entering Dublin airport every week on a flight from Chicago could take several hours to examine, with formal checks and documentary identification, he added.

“The thoughts of having to equip and staff a border inspection post for the many thousands of horses from the UK is quite a formidable challenge to contemplate.”

Dr Alan Fahey, associate professor of animal breeding at the school of agricultural and food science at UCD, said an update due to be published soon on a study he carried out in 2012 would likely show that the industry was worth in excess of €700 million to the Irish economy. He said Brexit would have a disproportionate effect on rural Ireland, where it could be a “disaster”.

Dr Fahey said about 60 per cent of horses sold at sales here were moved to the UK.

He said if the sport horse industry and the racing industry got together it would be a “louder voice” at the table representing a €2 billion industry and about 28,000 jobs.

David Carson, the Brexit lead at Deloitte, said all industries needed to be proactive in engaging with the consequences of Brexit.