Brexit may not be dead yet but it is certainly unwell

Talk has been of ‘transition’ and of ‘implementation’, with nobody sure of the difference 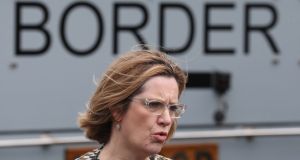 Is Brexit dying? It is tempting to say the UK government is in headlong retreat from its original Brexit plan. But that would assume there was a well-articulated vision in the first place. We now only hear faint echoes of the “no deal is better than a bad deal” as the penny seems to have dropped that any deal is likely to be superior to the “cliff-edge”, whereby the UK ceases to be a member of the EU in 20 months’ time with nothing agreed.

Talk of “transition” has been joined by suggestions of “implementation”, with nobody quite sure of the difference between the two. It amounts to a realisation that it’s all very complicated, all very damaging: so push out the date to the last possible moment – currently assumed to be the date of the next general election which most Tories hope will not be until 2022.

In one of her few good decisions, Theresa May has dispatched Boris Johnson to the furthest reaches of the ex-colonies where he can do least mischief. Her one other sensible move has been to take herself away from the UK, leaving policy to be made by the few adults left in Whitehall.

But even in Australia, Johnson continues to bluster and demonstrate an utter disregard for both reality and detail.

The increasingly irrelevant and hapless trade secretary, Liam Fox, is bogged down by rows over potential imports of chlorinated chickens from the US: free trade with America opens up all sorts of possibilities including, apparently, ingesting the same amount of chlorine as swimming in a municipal pool with your mouth open. Perhaps Mr Fox should try it.

Curiously, lifelong Eurosceptic David Davis, now minister for Brexit, seems to have allied himself with the chancellor and is warming to both implementation and transition. Ditto the charmingly bonkers Michael Gove.

Home secretary Amber Rudd announced this week that immigration reform would heed the requests of employers. The new approach to immigration seems to involve allowing free movement after 2019 but calling it something else.

Rudd announced the classic delaying tactic: a committee has been commissioned to examine the needs of the labour market and the role of immigration. The committee will deliver its report just six months from Brexit so Rudd promised “…our immigration proposals [will] ensure there is no cliff-edge on the UK’s departure for employers or individuals”.

In anyone’s language that must involve free movement. Except that the immigration minister, Brandon Lewis, insisted after the Rudd proposals were published that free movement will definitively end in 2019. Officials offered the clarification – an attempted reconciliation of the irreconcilable – that, post-2019, EU citizens can come to live in the UK provided they register. They also will probably not get automatic long-term residence rights once the implementation period is over.

All of that will look like freedom of movement to most people in the UK. So it will enrage the Brexiteers. But it isn’t freedom of movement as defined by the EU so it will be rejected in Brussels. This is just one illustration of the complexity and contradictions inherent in trying to appease the Brexit hard-liners, reach agreement with Brussels and minimise the economic fallout.

While Britain continues to try and work out what to ask for in the Brexit negotiations, the position of the EU is clearly hardening.

When the people on the other side of the negotiating table are in chaos it is rational to respond with a tougher stance. While Britain stumbles towards shambolic acceptance of the inevitability of a softer and longer Brexit, the EU might as well turn the chaos to its own advantage. That means not compromising until the very last minute. With the result that businesses will be forced over the next couple of years to move from contingency to action and actually start to move activities out of the UK.

My guess is that until a late-night summit some time early in 2019, the EU will insist that “transition” means the UK accepting every single piece of EU law, continued payments into the EU budget, the four freedoms (in full), the jurisdiction of the Europeans Court of Justice and all rules and regulations – including any new ones formulated during the transition period.

The only difference will be the UK won’t be in the EU so will not have a voice during any discussions of new rules and laws.

Brexiteers can see all this coming so are already preparing there own lines of attack. Nigel Farage has started to pen articles about “the great Brexit betrayal”. Their only possible line of defence will be to demand a cliff-edge departure. Logic dictates no other approach.

Brexit isn’t dead yet but it is certainly unwell. Whether the condition is chronic or terminal remains to be seen.