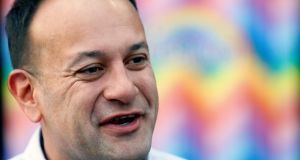 Taoiseach Leo Varadkar: Dublin will not come up with solutions to a problem created by the UK. Photograph: Peter Morrison/PA Wire

Former British government Brexit minister David Jones has expressed concern that Taoiseach Leo Varadkar has taken a different approach to his predecessor Enda Kenny on the issue of the Border after Britain leaves the European Union.

In recent comments about what the border between North and South might look like after Brexit, Mr Varadkar said Dublin was “not going to design a border for the Brexiteers”.

Abandoning the collaborative language that has marked the two governments’ statements on Brexit since the referendum last year, Mr Varadkar expressed clear frustration and indicated that Dublin would not come up with solutions to a problem created by the UK.

Mr Jones said Mr Kenny was “well disposed” towards finding a technological solution, while Mr Varadkar had spoken in terms of a Border “in the middle of the Irish Sea.”

He suggested that Mr Varadkar should consider the “seamless and frictionless” borders that operate between the USA and Canada and between Norway and Sweden.

“These are customs posts rather than border posts,” he told RTÉ’s Morning Ireland.

“We want the Border between the Republic and Northern Ireland to be free-flowing and frictionless with free movement through the Common Travel Area.”

Mr Jones said that the issue is what will replace the Customs Union and he felt a technological solution was a possibility. “The British and Irish economies are very closely intertwined. The state of affairs on the Border will have to be addressed by both governments.

“There are long historic links with Ireland, we don’t want to do anything to cause a problem to that.”