Speaking at the Tory party conference, British PM Theresa May has ruled out the possibility of a second Brexit referendum, saying such an outcome would be "a politician's vote." Video: Conservative Party 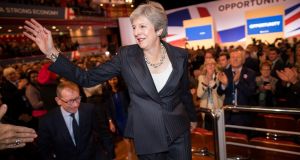 Britain’s prime minister Theresa May greets delegates after giving her keynote address on the final day of the Conservative Party conference in Birmingham on Wednesday. Photograph: Stefan Rousseau/AFP/Getty Images

The Government expects the British government to table new proposals on Brexit shortly which could break the logjam in the negotiations ahead of the European Council summit in two weeks.

With the British prime minister Theresa May having successfully come through her party conference yesterday, officials and politicians believe that long-awaited British proposals on the border backstop – which guarantees an open border in Ireland – will be made in the coming days.

While the EU will await the detail of the British proposals before evaluating whether they match expectations, there is a belief Ms May is preparing to make concessions which will arouse opposition among Brexiteers and in the DUP, according to four senior sources with involvement in the process in Dublin.

There have been private signals to the Irish Government in recent weeks, while DUP fears evident at the Conservative Party conference this week have encouraged Dublin to believe that Ms May is planning a significant move on the backstop.

Taoiseach Leo Varadkar travels to Brussels on Thursday for a meeting with the EU’s chief negotiator Michel Barnier, at which the two men are expected to discuss the progress of the negotiations and the prospects for a breakthrough before the forthcoming summit, scheduled to take place in Brussels in a fortnight.

On the basis of briefings from Mr Barnier, EU leaders will decide at the summit whether to convene a special summit in mid-November at which a deal could be clinched on a withdrawal agreement. This would avoid the prospect of a no-deal Brexit which would see the UK crash out of the union next March.

If a withdrawal agreement – along with an agreed declaration about the future trading relationship – is concluded in the coming weeks, the UK will enter a two-year transition period next March during which its relationship with the EU will remain unchanged.

However, the EU has consistently made clear that this can only happen if there is agreement on a legally binding Irish backstop.

If sufficiently clear and legally enforceable, this could solve the backstop problem from the Irish point of view, though other aspects of the British proposal, including Britain’s relationship with the EU’s customs union, could still be problematic for the EU.

The Irish Government could also object to any suggestion from Ms May that future regulatory divergence between the North and the rest of the UK would have to be approved by the Stormont Assembly, as Dublin believes it would amount to giving the DUP a veto.

However, Government sources remain cautious until they see the text of British proposals, though Dublin believes that Ms May’s successful conference will strengthen her hand to make compromises. On Wednesday, in her speech to the conference, she criticised hardline Brexiteers who rejected any compromise with the EU on the withdrawal deal.

“The people we serve are not interested in debates about the theory of Brexit – their livelihoods depend on making a success of it in practice. A Brexit that might make Britain stronger 50 years from now is no good to you if it makes your life harder today,” she said.

Appealing for unity, and implicitly warning of derailing the Brexit process if her government falls on the issue, she said, “If we all go off in different directions in pursuit of our own visions of the perfect Brexit we risk ending up with no Brexit at all,” Mrs May said.