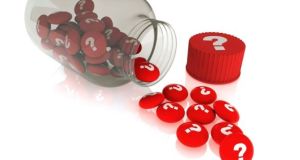 Part of the reason for the large increase in the seizure of steroids and other substances is increased activity by authorities in cracking down on illegal medications. Photograph: iStock

The amount of illegal medicines seized by authorities increased by over 40 per cent in 2017, largely due to a massive rise in the number of steroids being imported into the country.

The Health Products Regulatory Authority (HPRA), which is responsible for enforcing laws and regulations relating to medicinal products, detained some 950,000 doses of counterfeit or illegal substances last year compared to 670,000 doses in 2016.

Anabolic steroids, which are used to increase muscle mass, made up just under half of the seized medicines which were uncovered through both “ongoing surveillance and targeted intelligence-based operations”, the HPRA said in its annual report.

It seized 450,000 doses of anabolic steroids in 2017, compared to just 109,000 in 2016. Illegally-sourced sedatives made up 23 per cent of the total seizures, while illegal erectile dysfunction drugs made up 13 per cent.

Part of the reason for the large increase in the seizure of steroids and other substances is increased activity by authorities in cracking down on illegal medications.

In 2017, the HPRA, along with Revenue’s Customs Service and the Garda, took part in Pangea X, an Interpol-led operation involving 123 countries which targeted the online sale of illegal and counterfeit medicines.

In September last year a HPRA-led operation resulted in the seizure of 200,000 doses of illegal medicine, including steroids, sedatives and erectile dysfunction medicines valued at over €850,000.

Some 38 websites were investigated, and eight social media pages advertising the products were taken offline. The operation also resulted in two arrests.

In another operation 60,000 vials of anabolic steroids were detained in several locations in Donegal as part of a cross-agency initiative. Investigators also found doses of human growth hormones and erectile dysfunction medications. The total value of the seizures was about €2 million, the HPRA said.

The authority prosecuted six people for possession or supply of illegal medicines and issued formal cautions to six more. As part of its enforcement role it also seized and destroyed 336,000 doses of expired medicines.

Separately in 2017, the HPRA began examining methods to combat medicine shortages which have become a significant global problem in recent years.

The HPRA project aims to develop enhanced co-ordination across various Irish agencies to prevent and manage such shortages.

“The objective is to develop a national protocol for management of shortages to ensure better patient outcomes and enhanced communication and engagement on this key public health issue,” it stated in its annual report.